The Singapore Dollar was steady against an already weaker US counterpart on Friday on news that is home’s export recovery continued in January, and largely thanks to Chinese demand too, which could have welcome repercussions way beyond the city state.

Singapore’s Non-Oil Domestic Exports (NODX) rose 8.6% on the year in January, according to official data. That was below December’s 9.1% rise, and way below November’s 15.6% bonanza. But it was still a strong gain and much above the 7% or so which markets had expected.

It was also a third straight rise. That will be a welcome sight for Singaporean policy makers after a very patchy 2016.

Compared with December, exports rose a chunky 5%, more than reversing that month’s 2.4% slide. The meat of this data came in the breakdown, however. Exports to China soared 36.9% on the year, smashing the previous month’s 23.7% gain. Other big destinations were South Korea and Taiwan, but all of Singapore’s major markets saw export gains with the exception of neighboring Malaysia.

News of the Chinese contribution to Singapore’s ongoing export health chimes well with storming official trade figures already released from the world’s second-largest national economy. Even allowing for some trade “front loading” thanks to the relatively early timing of China’s major New Year festival, a constellation of trade data is starting to suggest that China’s economy is revving nicely.

The Singapore Dollar was already gaining on a generally weaker greenback when the data were released. USD/SGD got down to 1.41656 in the wake of the report, but had been edging down from the week’s peak of 1.41652 since Wednesday. That peak was scaled when Federal Reserve Chair Janet Yellen suggested in Washington that a US interest-rate rise could come quite soon. 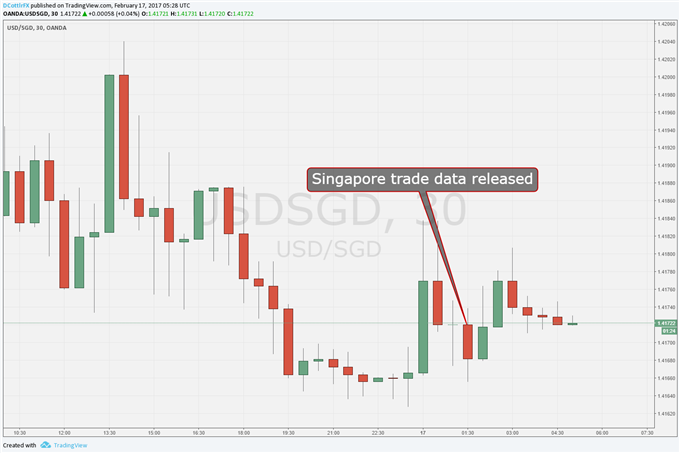 The city state’s currency trades under a “managed float” regime, meaning it is permitted to fluctuate freely, but within an undisclosed band.

Do you want to know more about financial markets, or would you like instant analysis of the most important economic data? Either way, the DailyFX webinars could be for you.