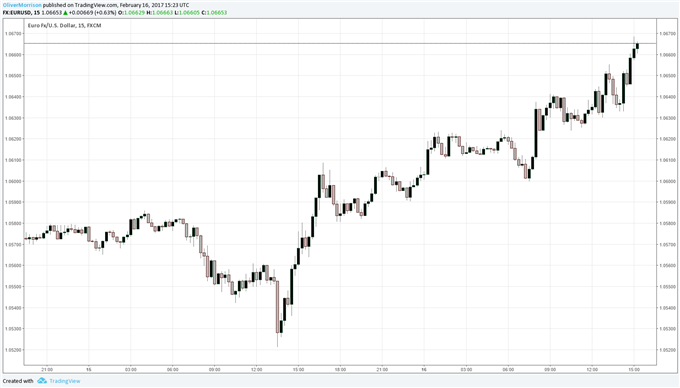 - Members concerned about lack of sustained inflation and geopolitics

- But, perhaps curiously, the Euro is still gaining on the Dollar

The European Central Bank sees ‘insufficient progress’ toward sustained inflation, suggesting it’s in no rush to alter its current ultra-dovish monetary policy stance. The account of the 18-19 January meeting, where ECB President Draghi stated that it would be premature to consider a near term tapering of the ECB’s QE programme, published Thursday reveals that “the Governing Council was seen as well advised to remain patient and maintain a ‘steady hand’ to provide stability and predictability in an environment that was still characterised by a high level of uncertainty.”

Members acknowledged the recent Eurozone growth developments and the jump in headline Eurozone headline consumer price inflation, and the bank expects Eurozone economic recovery to continue and become more balanced. However, members are still clearly concerned over the lack of evidence of underlying price pressures picking up.

They also warn there are significant downside risks to the growth outlook resulting from political uncertainties, and the global environment notably “uncertainties regarding the future policy choices of the incoming US administration, questions related to the path towards the United Kingdom’s withdrawal from the EU, risks of growing protectionist pressures, and the potential for renewed volatility and downward corrections in global financial markets.”

The minutes also revealed frustration with politicians’ failure to come up with the stimulus needed to lift the single currency area’s recovery, saying “A strong call” was needed to prod governments “to engage decisively in structural reforms to boost investment, reduce structural unemployment and increase potential output.”

The minutes support the view that, given stronger economic growth and higher inflation in the euro area, the European elections are more of a worry for markets and that the ECB is not likely to change tact on its asset buying program until the end of the year, when the political risks from elections in the Netherlands, France and Germany are out of the way.

Despite the reinforced dovish tone revealed by the minutes, the Euro has continued to gain on the Dollar Thursday. EURUSD currently trades at 1.0663, a rise of 0.0064 on the day. Curiously, the Dollar fell alongside Treasury bond yields yesterday even as projected Fed rate hike bets firmed following stronger-than-expected CPI data.This could well down to traders taking profits on long Dollar positions in light of the week’s major event risks done and dusted.