US Dollar Takes Another Leg Up as CPI, Retail Sales Both Beat Expectations

The US economy, already at the Federal Reserve’s definition of “full employment,” is heating up further, according to the latest inflation data released by the US Bureau of Labor Statistics. The Consumer Price Index proved stronger in January at +2.5% y/y, beating the expectation of +2.4% y/y, as prices saw the biggest gain since March 2012.

Core CPI came in higher at +2.3%, also beating expectations. Leading the rise in prices were energy input, which isn’t a surprise given where Crude Oil is trading currently relative to this time lsat year. In addition, the Advance Retail Sales report, perhaps the best proxy for consumption in an economy built on consumption (PCE was 69% of GDP in Q4’16), beat expectations this morning.

These data come against the backdrop of Fed Chair Janet Yellen testifying on Capitol Hill yesterday and today. In particular, the context in which the data is occurring - potentially before a wave of fiscal stimulus - is important. After six years of sclerotic US fiscal policy, there are high odds that gridlock in Washington D.C. ends. the combination of tax cuts and infrastructure spending, or deficit spending collectively, will help push inflation expectations higher, thus necessitating tighter US monetary policy.

In other words, the path of rate normalization could be faster than previously expected if fiscal stimulus transpires as rumored. This week alone rate hike odds have increased significantly, from 30% at the beginning of the week to 42% after today’s data, per Fed funds futures. 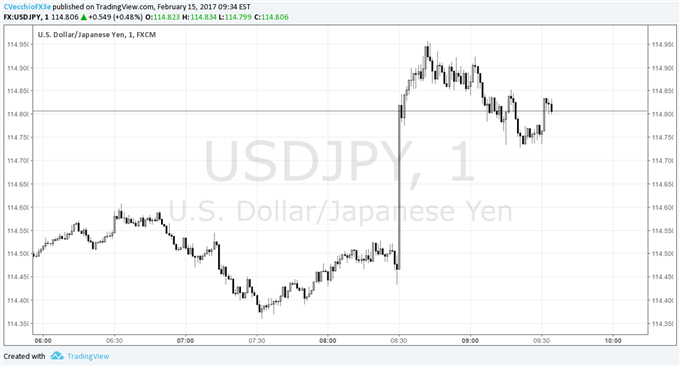 Immediately following the data, the US Dollar traded higher against most major currencies, particularly against the Euro and the Japanese Yen. USD/JPY rallied from 111.47 ahead of the relase to as high as 114.96 thereafter; at the time this report was written, it was trading back at 114.81.

Read more: Led by EUR/USD & USD/JPY, DXY May Have Bottomed