Sweden’s Krona fell against the Euro and the Dollar after the country’s central bank, the Riksbank, kept rates on hold at -0.5% at its February policy meeting and left intact a government bond-buying program set to continue until June.

The decision to hold pat was expected, but the bank maintained a very dovish tone, stressing the chances of further rate cuts despite the strength of the Swedish economy, which took markets by surprise and put the currency under selling pressure.

The bank’s December meeting gave Krona bulls some hope that the Riksbank might climb down from its ultra-accommodative policy stance. At that meeting, the Riksbank extended its asset purchase programme and said that it will buy additional SEK 30 billion in bonds by mid-2017. But the minutes published in January revealed that three of six board members spoke out against giving an outlook that signalled another rate cut, and that Governor Stefan Ingves was forced to use his decisive vote to push through an extension of asset purchases.

But the bank maintained a very dovish tone today again in its February policy meeting, repeating a threat to intervene in FX markets should a strong krona, which has strengthened more than forecast since the December meeting, jeopardize efforts to reach its inflation target.

“The krona exchange rate continues to create uncertainty about the development in inflation,” the central bank said. “Since December, the krona has been clearly stronger than expected. This rapid appreciation is not expected to continue, however.”

It said there “is still a greater probability that the rate will be cut than that it will be raised in the near term” and said it sees “slow increases” in rates that “will not begin until the start of 2018.” It added: “For inflation to stabilise around 2%, a continued strong level of economic activity and a krona that does not appreciate too rapidly are required. Monetary policy therefore still needs to remain expansionary.”

EURSEK and USDSEK both quickly spiked on the news, although they soon retreated from the highs, indicating that the overall trend of an appreciating SEK isn’t set to change. EURSEK currently trades at 9.4528, a small rise of 0.0046 on the day. USDSEK trades at 8.9511, a rise of 0.0183 on the day. 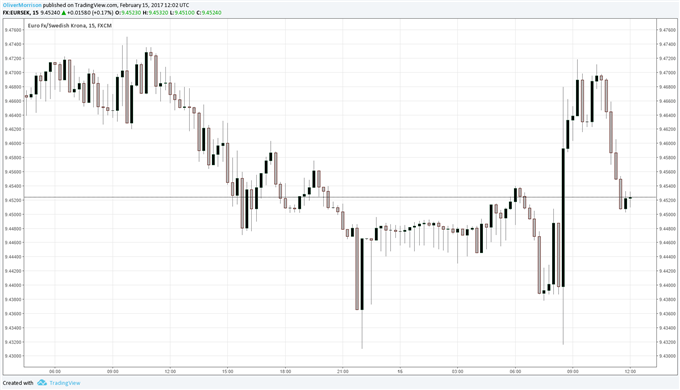