- Fed Chair Yellen speaks to need for rate normalization over course of 2017.

- Trader positioning is flipping against the US Dollar – which may be a contrarian signal for more greenback bullishness in the coming days.

Fed Chair Janet Yellen has ascended Capitol Hill today for the first of two days of testimony in front of Congressionally leaders, colloquially known as the Humphrey-Hawkins testimony. Today, in front of the Senate Banking Panel, the Fed Chair didn’t reveal much new information, if at all, which isn’t surprising: no Fed chair has ever pre-committed to policy at a Congressional hearing.

It was the context in which Fed Chair Yellen’s comments fell against that proved to be incendiary: that after six years of sclerotic US fiscal policy, there are high odds that gridlock in Washington D.C. ends. This is, of course, the gist of the “Trump reflation trade”: the combination of tax cuts and infrastructure, or deficit spending collectively, will help push inflation expectations higher, thus necessitating tighter US monetary policy. In other words, the path of rate normalization could be faster than previously expected if fiscal stimulus transpires as rumored.

The highlight of Fed Chair Yellen’s testimony thus far was perhaps her comment on how it would be short-sighted to not raise rates multiple times this year. "Waiting too long to remove accommodation would be unwise, potentially requiring the FOMC to eventually raise rates rapidly, which could risk disrupting financial markets and pushing the economy into recession."

Furthermore, she noted that "At our upcoming meetings, the Committee will evaluate whether employment and inflation are continuing to evolve in line with these expectations, in which case a further adjustment of the federal funds rate would likely be appropriate.” As discussed in our preview for the testimony today, this means that the door for a Fed rate hike in March is not off the table. In turn, the US Dollar is gathering steam, clearing out significant levels of resistance on the way up. 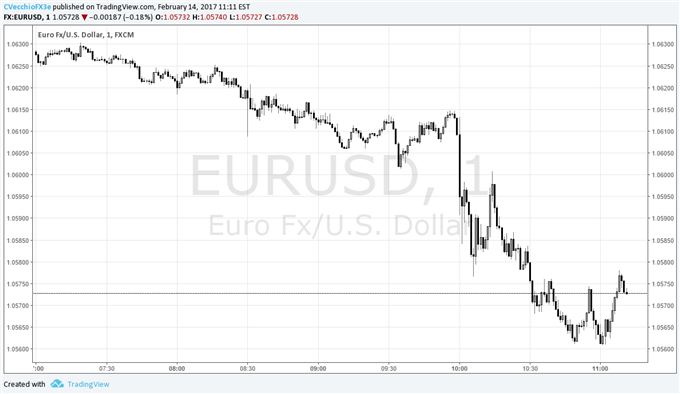 Amid the testimony, the US Dollar set a fresh monthly high versus the Euro and the Japanese Yen, carring the Dollar Index (DXY) to its highest level since January 20. EUR/USD slipped to its lowest level since January 11 at 1.0561, while USD/JPY, tracing the jump in US yields, saw its highest price sine January 30 at 114.48. At the time this report was written, EUR/USD was trading at 1.0573 and USD/JPY was trading at 114.31.

Read more: DXY Peeks Over the Wall, but Yet to Clear Key Level

US Dollar (DXY) Latest: The Fed’s Dovish Nudge Sends the US Dollar Tumbling