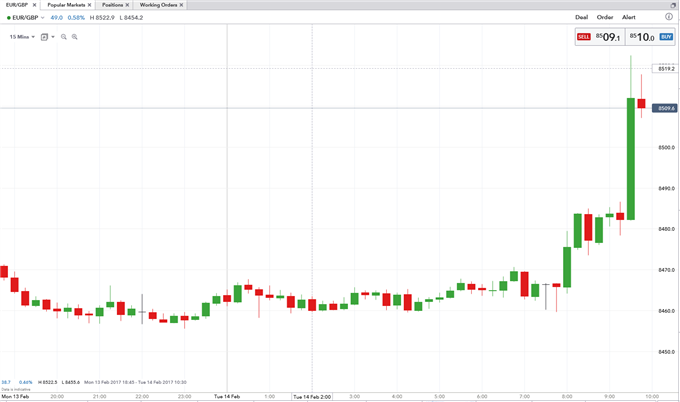 - EURGBP recovers after ‘sell the rumor, buy the fact’ trade pushed the pair below 0.84600.

Eagerly awaited UK inflation data failed to live up to market expectations, despite inflation hitting its highest level since June 2014, taking the edge off the latest downturn in EURGBP. January CPI y/y was reported at 1.8% against expectations of 1.9%, while core CPI was reported at 1.6% against market expectations of 1.7%. While these figures may help Bank of England governor Mark Carney push back against any overly hawkish talk of rate rises, the recent weakness in the British Pound is causing input price pressure to increase.

Commenting on today’s inflation figures, ONS Head of Inflation Mike Prestwood said: “The latest rise in CPI was mainly due to rising petrol and diesel prices, along with a significant slowdown in the fall in food prices.The costs of raw materials and goods leaving factories both rose significantly, mainly thanks to higher oil prices and the weakened pound.”

While UK inflation creeps higher and starts to hit consumers in the pocket, house owners got an unexpected boost this morning. Average house prices in the UK increased by 7.2% in the year to December 2016 (up from 6.1% in the year to November 2016), continuing the strong growth seen since the end of 2013. However, annual growth has been weaker in the second half of 2016 compared with the first half of the year, the ONS said.