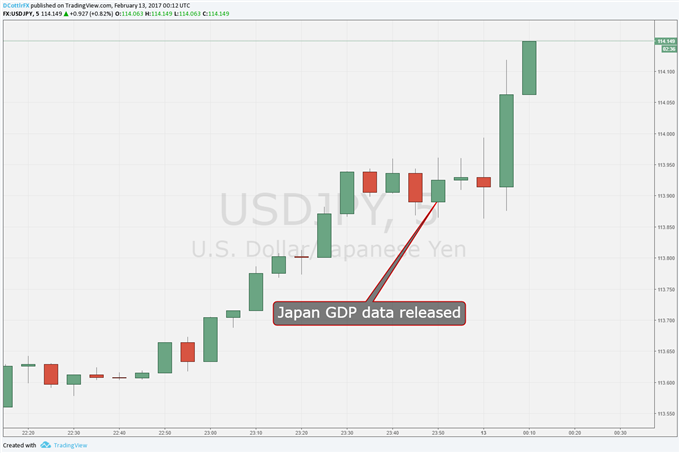 The Japanese Yen fell against already strengthening US Dollar early in Monday’s Asia/Pacific session after a soggy set of official Japanese growth data.

Preliminary Gross Domestic Product figures for the fourth quarter of 2016 missed forecasts across the board, if not by much. The annualized figure came in at a 1% rise, below both the 1.1% which markets had looked for and the previous quarter’s 1.3% gain. Compared to the third quarter, growth was 0.2%, less than the 0.3% predicted.

Business spending also fell short, with a 0.9% on-quarter rise. The main (modest) bright spot in the data came from the “GDP deflator.” This is a measure of inflation and it fell by only 0.1%. A 0.2% fall had been expected.

All up this tepid set of numbers hardly inspires hope that Asia’s second largest economy is cruising into uncertain economic times with all sails set.

Still, there were some other hopeful signs. Exports expanded at the fastest pace since 2014 and the economy overall notched up a fourth straight quarter of growth. It hasn’t done that for three years.

USD/JPY got up to 114.49 after the figures, from 113.86 just before. It is hard to tell from the currency markets just how these figures are being viewed. A fall in the Yen does not always mean that investors are taking a bearish view on Japan. Given the currency’s ‘haven’ status it can simply mean that they see better returns elsewhere. But some certainly abandoned it after this data release.

Weak, but not weak enough? Japan’s GDP data seemed to pass USD/JPY by.

Would you like to know a little more about financial market trading? The DailyFX webinars should be your first stop.