- European economic recovery is expected to continue this year and next driven by domestic demand.

The latest European Commission 2017 Winter Economic Forecast sees euro area GDP growth revised slightly higher to 1.6% this year from 1.5% in the Autumn Forecast and to 1.8% in 2018 from a prior 1.7%.

“Having proven resilient to global challenges last year, the European economic recovery is expected to continue this year and next: for the first time in almost a decade, the economies of all EU Member States are expected to grow throughout the entire forecasting period (2016, 2017 and 2018). However, the outlook is surrounded by higher-than-usual uncertainty,” the report states. Private consumption is still the “engine of the recovery” while investment growth continues but remains subdued, the report adds.

While the pick-up in growth across the euro-zone will be welcomed by ECB President Mario Draghi, and seen as vindicating his current monetary stance, inflation is expected to stay below the central bank’s stated target. This would leave President Draghi under pressure to extend or increase his current ultra-loose monetary policy to bring inflation up to target, a move that Germany would strongly push back against.

Inflation in Germany recently hit a 4-year high of 1.9% prompting calls from a wide range of German analysts for the ECB to start normalizing policy and begin raising interest rates. In an interview with German newspaper Sueddeutsche Zeitung, German Finance Minister Wolfgang Schaeuble said that it would probably be right “if the ECB starts daring to head for the exit this year” although he admitted that this would prove to be a difficult task.

And while additional or extended QE remains a possibility, the single currency will continue to head lower. In the US, interest rates are expected to be hiked two or three times in 2017, while the recent sharp uptick in CPI in the UK could see interest rates nudged higher in 2017 despite ongoing Brexit concerns. 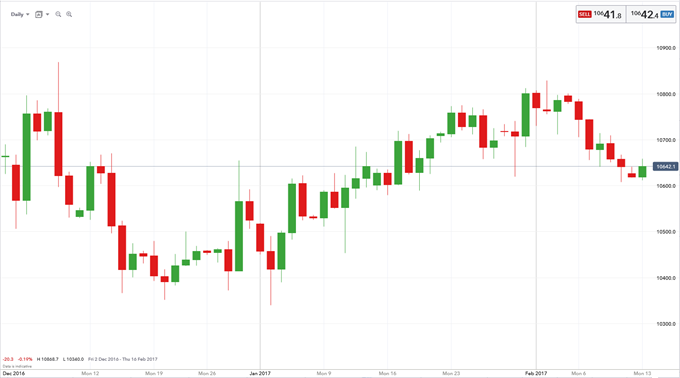