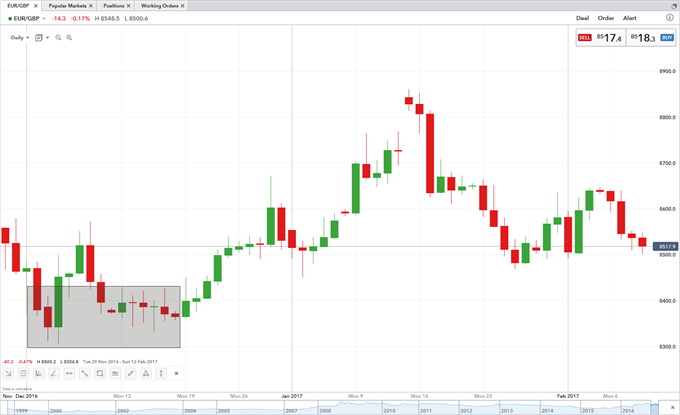 The recent rally in German government debt may be taking a pause today but bonds are still heading back to multi-week yield low levels as investors flock to Europe’s safe-haven of choice as political uncertainty continues to stalk Europe. And with that situation unlikely to change in the short-term, and with the ECB continuing to buy bonds at a rapid clip, yields are set to go lower.

German bonds have been the default risk-off trade of choice for European bond investors ever since ECB President Mario Draghi said that he would do ‘whatever it takes’ to save the Euro-Zone at a London investment conference in July 2012. These yields are now likely to fall further with uncertainty increasing ahead of elections in the Netherlands, France and Germany while the ongoing debt-stalemate in Greece needs to be addressed before a heavy bond repayment schedule in July.

German two-year debt currently trade at -0.780% while 10-yr Bunds offer just 0.308%, and with inflation running at a current level of 1.9%, domestic bond holders are losing money by lending money to the German government.

The latest trade figures from Germany will also cause more murmurings of discontent in Europe, and abroad, despite the monthly down-tick in December. Germany’s trade surplus rose to a record EUR253 billion in 2016, according to the Federal Statistics Office, as exports hit EUR1.2 trillion and imports rose to EUR954.6 billion. Europe’s economic engine has benefitted from the weak Euro, and today’s figures will be closely noted by its other trading partners and the US in particular. In a recent interview with the Financial Times, Peter Navarro, head of the US National Trade Council, said that the Euro was like an ‘implicit Deutsche Mark’ and that Germany continues to exploit other countries in the EU as well as the US.

However Germany is unable to deal with this perceived imbalance as the ECB continues with its ultra-loose monetary policy, something that Draghi reiterated this week. Speaking to MEPs at the European Parliament, Draghi confirmed that the ECB could and would increase the size and duration of its bond buying program if nascent growth in the Euro-Zone failed to take-off.

And political uncertainty is set to rise further next month when the UK is expected to trigger Article 50 and begin official talks to leave the European Union. The single currency appreciated sharply against the British Pound in the wake of the referendum last June and despite a minor pullback, EURGBP is still 13% higher from pre-referendum levels. EURGBP is also close to a recent cluster between 0.83200 and 0.84000 which may prove to be vulnerable if political uncertainty continues to weigh on the single currency.