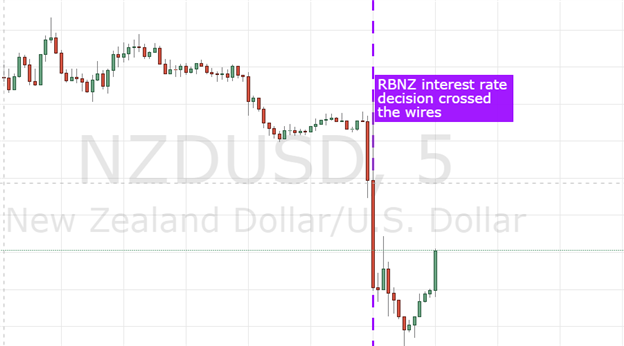 The New Zealand Dollar fell sharply against most peers Thursday morning in Auckland as the Reserve Bank of New Zealand held its benchmark interest rate, and stirred expectations of further policy bearings. As expected, the RBNZ held its official cash rate (OCR) at 1.75 percent, but the statement and Governor rhetoric that followed spoke to an outlook that presented an uncertain global outlook and surprise change in policy tack and timing which seems to have still poured cold water on rate hike bets.

While a move from the RBNZ was not expected at this meeting – the central bank cut rates as recently as its November meeting – overnight index swaps (OIS) have signaled that traders have anticipated a reversal in policy on the horizon. The market instrument was pricing at least one 25bps increase in the benchmark interest rate within the next 12 months just before the announcement. In the statement that accompanied the decision, caution on the global outlook seemed to keep the uncertain-but-dovish path intact. However, Governor Graeme Wheeler’s remarks after the decision itself altered that view.

In the Governor’s remarks, there was a dovish element in a now-familiar assessment that the currency should be lower than its prevailing rate in the market. Though this was not assessed with a threat of future action, the suggestion of a 7 percent depreciation raised eyebrows with its specificity. In contrast, an explicit remark that the central bank had removed its dovish bias and was not on a ‘neutral’ footing held a hawkish element. He would go on to suggest that a hike was possible within two years. Yet, that is a time frame which is actually materially slower than what the market had anticipated with pricing a hike within 2017. What could have been a hawkish turn therefore may actually be construed as dovish due to speculation.