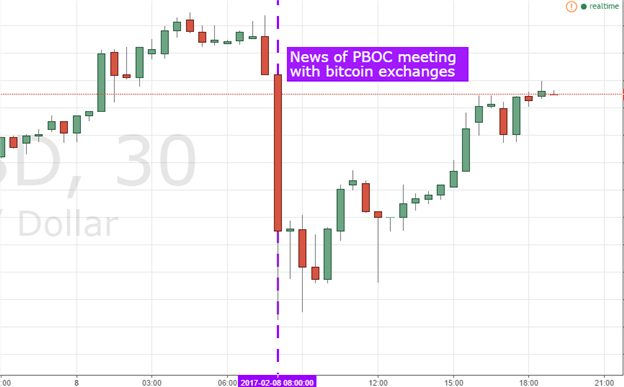 Bitcoin fell more than 4 percent against the US Dollar after news that the People’s Bank of China (PBoC) would meet with representatives of several local bitcoin exchanges. The move heightens concerns that further tightening of regulations on the digital currency could severely curtail its use locally and liquidity globally. The closed-door meeting was to be held Wednesday afternoon with representatives from several of the county’s most prominent bitcoin exchanges, with money laundering appearing to be among the topics of interest.

After gaining 120 percent in 2016, bitcoin was crowned the top performing currency for the second year in a row. In opening days of 2017 the crypto currency enjoyed another drive of rapid gains with much of that climb being attributed to a surge in demand for the crypto currency in China. However, this swell interest also drew the attention of Chinese regulators who have attempted to balance growth and financial stability. Part of their push seems to center on ensuring its capital curbs are respected. Bitcoin could be construed as a threat to that control.

In 2013, digital currencies experienced an expected rise in use when foreign investors in Cyprus sought a means to bypass capital controls implemented by officials amid a financial crisis. Bitcoin and other cryptocurrencies represented a means to circumvent such capital controls. Black markets have arisen when such restrictions have arisen in the past, but the rise of these new and semi-legitimate instruments creates a greater opportunity for those looking to avoid the restrictions and risk among those that are attempting to enforce them. The regulatory environment for bitcoin and other digital currencies will likely remain center stage for near-term risk. 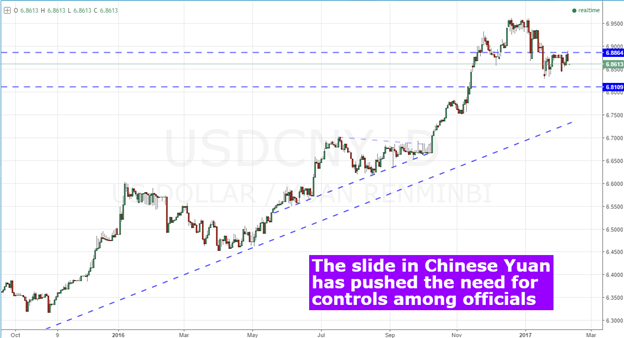