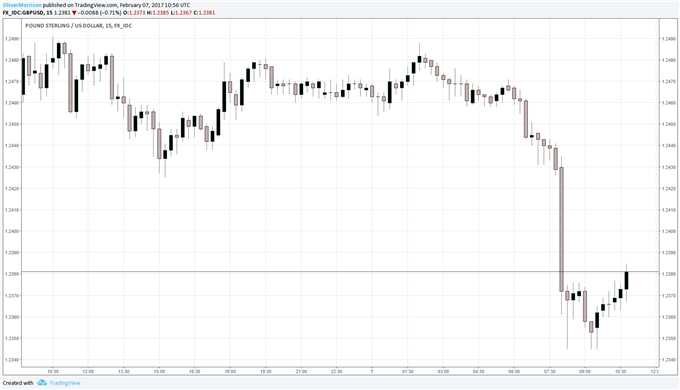 GBPUSD has dropped through an important support level as a latest sign of a slowing in the UK housing market stoke fears of weakening consumer fundamentals in the country.

House prices suffered their first monthly fall since August last year, just over a month after the Brexit vote, according to data released Tuesday by Halifax, a mortgage lender. Price growth fell 0.9% in January after a 1.6% surge in December. Economists had forecast house price growth remaining flat on the month.

The three-month average of year-over-year growth in prices also fell to 5.7% from 6.5% in December, again missing the consensus of 6.0%. The fall in house prices in January follows four consecutive months of strong growth; prices were still 2.4% higher in the three months to January than in the prior three months.

But there are still signs growth will moderate further over the coming months, and analysts are concerned that weakening consumer fundamentals, rising caution over making major spending decisions, and elevated house price to earnings ratios are likely to weigh down on the UK house market. However, a lack of supply is likely to put a hard floor under prices.

Last week, another British mortgage lender Nationwide reported that annual UK house price growth in January dropped to its weakest level since November 2015. It said prices rose 0.2% last month, down from a 0.8% rise in December, although prices were still 4.3% higher than at this time in 2016.

"The outlook for the housing market remains clouded," said Nationwide economist Robert Gardner. He added that despite unwavering economic data since the UK’s Brexit vote in June last year, "there are tentative signs that conditions may be about to soften.”

The Pound, meanwhile, has failed to capitilize on the weakening Euro, which is again in the midst of an EU existential crisis as sovereign spreads continue to widen sharply, chiefly driven by political uncertainty in France. EURGBP is unwavering around the 0.86 level. But Sterling is dropping against the Dollar, breaking through support in the 1.2400-25 area. This could well open a big drop toward the next support level around the 1.2000 area.