- He also confirms APP monthly purchases at €60 billion from April to December 2017.

- EURUSD was dropping in run up to speech and recovered some losses afterwards – suggesting a short squeeze in the pair.

EURUSD dropped to a session low of 1.0704 but then recovered as European Central Bank President Mario Draghi told the European Parliament's committee on economic affairs Monday that the Euro-Zone's economic recovery is picking up strength but still requires stimulus.

Speaking at 1400 GMT, Draghi told the hearing that the recent rise in inflation in the Euro-Zone was largely down to the one-off impact of oil price rises, while underlying inflation pressures remain ‘very subdued’. He said the ECB will look through the spike if deemed temporary, and stressed that the central bank remains ready to increase its expanded asset purchase program in size and duration, confirming at the same time the monthly purchase pace of €60 billion from April to December 2017.

"Support from our monetary policy measures is still needed if inflation rates are to converge towards our objective with sufficient confidence and in a sustained manner," Draghi said. "Our monetary policy strategy prescribes that we should not react to individual data points and short-lived increases in inflation. We therefore continue to look through changes in HICP inflation if we believe they do not durably affect the medium-term outlook for price stability.”

Fillon was rumored to be pulling out as a candidate, but in a speech at 1600 GMT he instead apologized for employing his family and promised to keep campaigning with ‘renewed energy’.

Germany’s finance minister Wolfgang Schäuble also complained at the weekend that the Euro is too weak for Germany and lashed out at the ECB, saying the central bank “must make policy that works for Europe as a whole”. The French-German 10-yield spread widened Monday to the highest level in four years; and the Italian-German 10-year yield spread to its widest since 2014.

EURUSD was dropping in the run up to the speech, but has since recovered some of these losses to currently trade at 1.0737, a drop of 0.42% for the day. The move back up suggests a short squeeze in the pair, with traders shorting the Euro covering their positions, in effect driving the price back up.

The Euro is down slightly versus the British pound on the day at 0.8623. The single currency has also fallen against the Japanese Yen. EURJPY currently trades at 120.61. 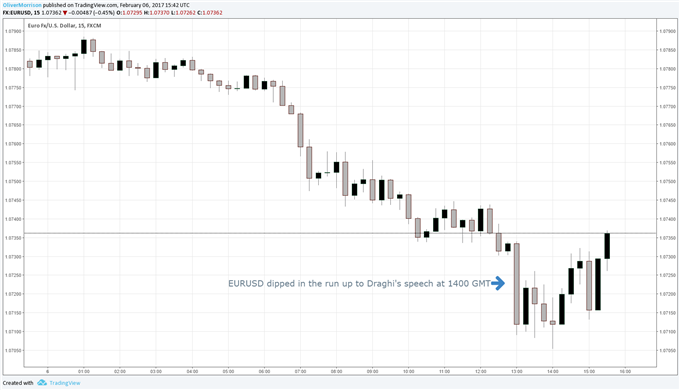