- Headline jobs growth comes above +200K for the first time since September.

Jobs growth in the United States increased to +227K in January, beating expectations of +175K, as the economy showed further signs of modest improvement in the first month of the Trump presidency. The December reading was revised only slightly to +157K from +156K; overall, however, the net-two month revision was -39K.

Other parts of the report painted a mixed picture of labor force strength. The labor force participation rate edged higher, up to 62.9%, which is part of why both the the unemployment rate (4.8% from 4.7%) and the underemployment rate (9.4% from 9.2%) rose slightly.

While today’s reading of +227K is on the high end of estimates, it’s important to keep in mind that the US economy doesn’t need such strength in the headline figure to maintain the unemployment rate at its current “full employment” level. According to the Atlanta Fed jobs calculator, the US economy needs to add +109K jobs per month over the next 12-months in order to keep the unemployment rate at 4.8%.

While this looks like another ‘Goldilocks’ report, wage growth – and implicitly, inflation pressures – softened. Annual wage growth came in at +2.5%, while the December figure was revised down to +2.8% (y/y). Previously, wage growth was at its highest level since June 2009. Such a development comes as a detriment to the US Dollar, as higher inflation expectations necessitate higher US yields, which have underpinned greenback strength.

As far as rate hikes are concerned, this report is a mixed bag; June 2017 and December 2017 remain the most likely periods for the Fed to raise rates this year. However, what may prove more important is the timeline of fiscal stimulus expectations: tax reform and infrastructure spending hopes have been the primary drivers of inflation expectations (and thus US yields); without them, the US Dollar remains vulnerable. 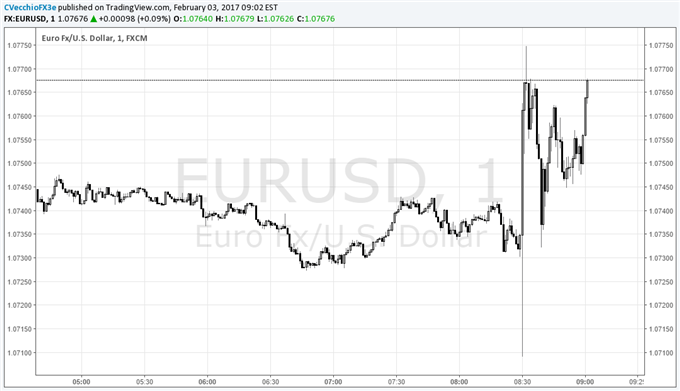 Immediately following the data, the US Dollar set a fresh high versus the Euro (EUR/USD fell to 1.0709), but once the internals were digested, price quickly resolved to the upside. At the time this report was written, EUR/USD was trading at 1.0767, while the broader US Dollar Index (DXY) had fallen back below 100.