- EURGBP rises on upbeat economic data from the Euro-Zone.

- But the Euro fails to rally against the Dollar or the Yen.

Positive data out of Europe on Friday morning helped lift the Euro against the British Pound, but not versus the Dollar or the Yen. IHS Markit’s final composite purchasing managers’index stayed at December’s 54.4, the highest level since May 2011 and beating a 54.3 flash estimate. A PMI for the dominant services sector matched December’s 53.7, just above the earlier flash reading of 53.6.

Service providers also remained optimistic in December, hiring at the fastest rate since July. The employment index rose to 52.8 from 52.2. More cheer was provided by the new business sub-index, which rose to 54.3 last month from 54.1, its highest reading since November 2015.

“The latest reading is comparable to GDP rising at a quarterly rate of 0.4%, indicating that the economy is starting 2017 on a solid footing,” said Chris Williamson, chief business economist at IHS Markit.

“Meanwhile, faster growth of new business and an upturn in confidence about the year ahead to the highest since the region’s debt crisis bodes well for the robust pace of growth to be sustained in coming months.”

Retail sales, meanwhile, released by Eurostat later on Friday, dipped unexpectedly in December, dropping 0.3% month-on-month, against expectations of an increase of 0.3%.

On a yearly basis, retail sales growth eased to 1.1% from 2.5% in November. This was the weakest growth in three months. Sales were forecast to climb by 1.8%.

The PMI data lifted the Euro against the British Pound (see chart). The British currency remains under selling pressure after the Bank of England downgraded 2017 inflation expectations and noted ongoing Brexit uncertainties yesterday.

But the Euro remains in a downward trend versus the Dollar, and is still trading sideways against the Japanese Yen. The fundamentals point to the Euro remaining weak. Despite improving data, the European Central Bank appears in no mood to raise interest rates at the current time. And if there’s no change to the ECB’s QE program that will likely cause persistent selling pressure on the Euro.

What’s more, the Euro-Zone economy continues to be plagued by high unemployment and a lack of structural reforms in many individual countries, poor wage growth and weak business investment. It also faces huge political uncertainty, with impending elections in the Netherlands, France, and Germany.

Technically, EURUSD has formed a ‘rising wedge’ pattern on the daily chart; a sell signal. However, today’s all-important non-farm payrolls data in the US offer a problem to any technical trade, as if the data surprise in either direction they’re likely to create volatility in the Greenback. 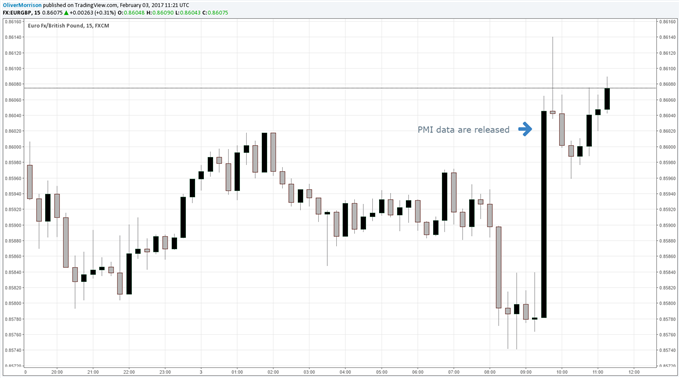