- However, a jump in input costs should support GBPUSD longer-term

The January UK composite purchasing managers’ index fell in January to 55.2, its lowest level since November – down from 56.5 in December and below the consensus forecast of 56.0. That makes an easing of UK monetary policy, and therefore a weaker Pound, marginally more likely in due course. However, the figure was offset by data showing that the input costs index rose from 66.8 to 69.1, its highest since January 2011 and a more positive figure for Sterling.

In response, GBPUSD dropped back but then recovered some of its losses as traders reasoned that higher input costs could lead to rising inflation and therefore a more hawkish outlook for monetary policy and the Pound. 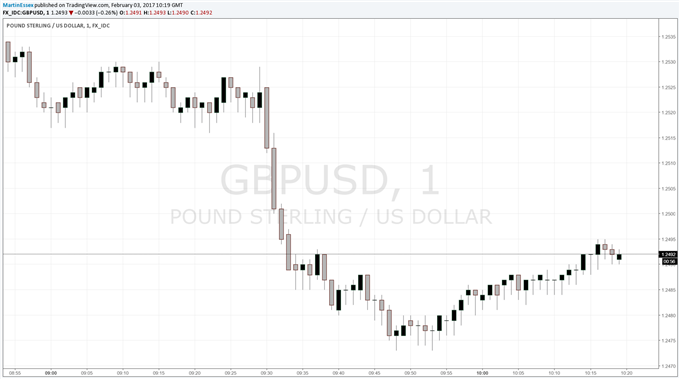 Similarly, a fall in the January PMI for the UK services sector from 56.2 to 54.5 – below the expected 55.8 and the lowest since October – was offset both by a rise in the input costs index to its highest since March 2011 and the strongest rise in business expectations since May 2011.

According to IHS Markit, which compiles the figures,taken together they still pointed to growth of 0.5%quarter-on-quarter in the first three months of 2017 if the economy maintains its current strength, matching the Bank of England’s latest forecast and only just below the 0.6% growth recorded in the final three months of last year. “Optimism about the coming year has risen to its highest in one-and-a-half years, improving across the board in all sectors to suggest that January’s slowdown may only be temporary,” IHS Markit economist Chris Williamson said.