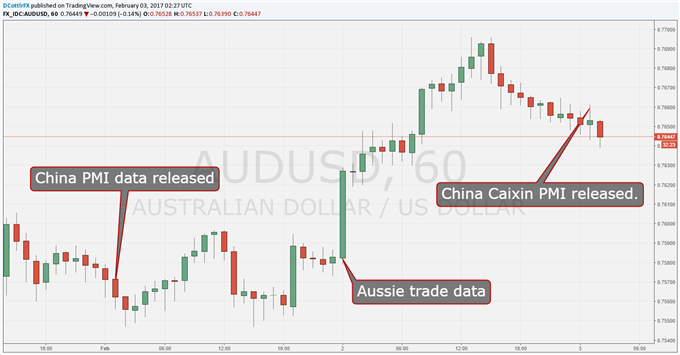 The Australian Dollar slipped a little on Friday after the release of Chinese manufacturing data which disappointed the market. It remains close to three-month highs against its US cousin though.

The Caixin Purchasing Managers Index for January came in at 51.0, way below the 51.8 which markets had hoped for and December’s 51.9. This snapshot looks at smaller, mostly private Chinese manufacturing concerns. It came after Wednesday’s official PMI tipped the scales at 51.3, a tick below December’s score but a tick above expectations. That focuses on the large, state-controlled enterprises

In the logic of PMI surveys a print above 50 indicates expansion, with contraction lurking below that line. The Caixin PMI has been expanding since June.

All up, the picture for Chinese manufacturing as 2017 starts is one of stability but not stellar growth. It’s little wonder then that Chinese Premier Xi Jinping went to Davos this year to bang the drum for free trade. China may be pivoting towards services and consumption but its vast manufacturing and exporting machine clearly needs the external sources of demand on which it has relied for so long.

The Australian Dollar leaped to three-month highs on Thursday on the back of blockbuster trade data. The Lucky Country lived up to this nickname and managed a record high A$3.5 billion (US$2.6 billion) surplus for December.

This was largely thanks a surge in the value of commodity exports to China. The trade feast was doubly digestible to Aussie bulls. It was good news in its own right, but also raised the prospect that trade will keep the whole economy out of technical recession. Australia chalked up a rare economic contraction in the third quarter of 2016, causing the usual nervous market assessment of the chances of another one. The trade figures provided some reassurance that the fourth quarter will show growth.

Lower, but still well up for the week. AUD/USD

We’re well into the year’s first quarter now. How are the DailyFX analysts’ forecasts for the period holding up?