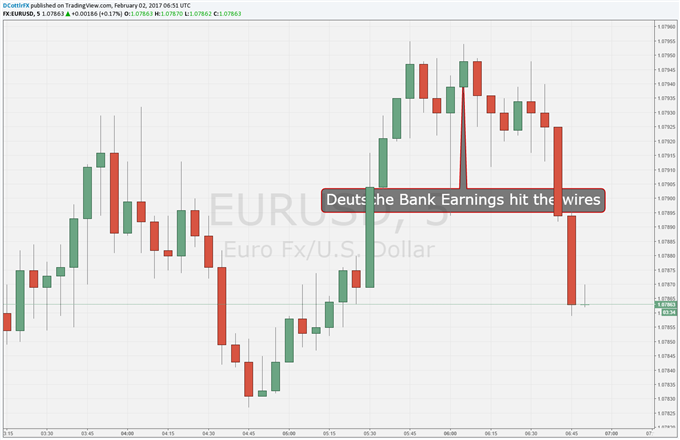 The Euro faded a little on Thursday despite the release of some better-than-expected earnings figures from troubled German investment-banking giant Deutsche Bank AG.

It said its net loss for the three months to December 2016 was €1.89 billion ($2.04 billion) compared with €2.2 billion a year earlier. Analysts had been looking for a €2.2 billion shortfall according to wire reports.

The lender announced a full-year net loss of €1.4 billion for 2016 as a whole, massively better than the €7.3 billion miss in 2015. It also said that its Tier-1 capital was 11.9% at year-end, up from 11.1% in December 2015 and the strongest for twelve quarters. This is a key measure of any bank’s financial strength. It has gained extraordinary prominence in investors’ minds since the financial crisis exposed many banks as far weaker than they had appeared.

Deutsche shares fell sharply in mid-2016 after a proposed $14 billion settlement with the US Justice Department related to the selling of residential mortgage-backed securities (RMBS). Investors were then worried about the German titan’s capital position but its management always insisted that its shoulders remained broad enough to cope.

Since then the bank has sold off its UK insurance business, slashed bonus payouts and cut staffing levels. In January of this year it was announced that Deutsche would pay $7.2 billion for misleading investors. The Department of Justice said that this was the largest single RMBS resolution for the conduct of a single entity.

Combined with penalties imposed in the US and the UK, the German titan has agreed to almost $8 billion in settlements to end probes into RMBS sales and other compliance failures. Not all of the bank’s problems have been of its own making. Indeed, they are arguably just the most visible sign of the toxic effects of very low interest rates and uninspiring economic growth on European banking as a whole.

The Euro retreated modestly after the earnings were released, which was early in the European market session. EUR/USD slipped to 1.07894 just after they hit the wires, from 1.07946 beforehand.

Deutsche Bank’s shares are up more than 10% for 2017 so far and have more than doubled in price from the multi-year lows seen September, 2016.

We’re well into 2017’s first quarter now. How are the DailyFX analyts’ forecasts holding up? Find out here.