- Berlin is using a “grossly undervalued” Euro to gain advantage over its trading partners, he told the Financial Times newspaper

The Euro gained a cent against the dollar and strengthened against other rivals too Tuesday after Peter Navarro, the head of Donald Trump’s new National Trade Council, told the Financial Times that Germany is using a “grossly undervalued” Euro to “exploit” the US and its EU partners.

In comments which the newspaper said are likely to trigger alarm in Europe’s largest economy, Navarro described the Euro as like an “implicit Deutsche Mark” whose low valuation gave Germany an advantage over its main trading partners. His views, the FT added, suggest the new US administration is focusing on currency as part of its hard-charging approach on trade ties.

In response, EURUSD charged from below 1.07 to above 1.08 at one point, while EURGBP popped higher before easing back and EURJPY strengthened but then more than lost its gains. 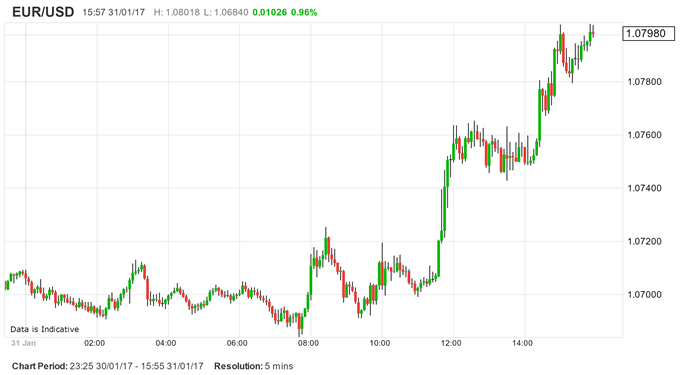 Navarro’s comments were challenged by German Chancellor Angela Merkel, who said her government had always called on the ECB to pursue an independent policy. “Germany is a country that has always called for the European Central Bank to pursue an independent policy, just as the Bundesbank did that before the Euro existed,”she told a news conference. “Because of that we will not influence the behaviour of the ECB. And as a result, I cannot and do not want to change the situation as it is,” she added.

However, there was some evidence that Navarro has a point in the day’s economic data. In Germany, unemployment fell by 26,000 in January, to a record low, and the jobless rate eased to 5.9% from 6.0%. By contrast, data from Italy showed the unemployment rate at 12% in December, stable compared with an upwardly revised rate for the month before, which was the highest since June 2015. Youth unemployment climbed to 40.1%, its highest level since June 2015, from a revised 40.0% in November.

The north/south divide in the Euro-Zone was also emphasised by news that Spanish inflation rose to 3% in January, its highest since December 2012. Figures released Monday showed inflation in Germany in the same month was just 1.9%, although that was the country’s highest inflation rate since July 2013.