- Rising inflation is set to continue lively discussions between the ECB and the Bundesbank.

The recent rise in German inflation is set to further fuel the debate that the ECB’s ultra-loose monetary policy is starting to hurt the euro-zones growth engine. An annual, preliminary, reading of 1.9%, will hurt German savers further with government bond yields negative out to seven years, while the German 10-year benchmark still only offers a shade under 0.5%, despite a recent back-up in yields to highs last seen in January 2016. Despite missing expectations of a 2.0% increase, inflation is on the rise and likely to continue to do so over the next few months.

ECB President Mario Draghi will now have to balance calls from the Bundesbank and other German economic commentators to control inflation while continuing to provide economic stimulus to the Southern areas of Europe where growth is still in its nascent stage and unemployment remains high.

President Draghi however will be able to point to the recently released European Commission’s Economic Sentiment Indicator (ESI) as proof that his monetary policies are bearing fruit. January’s rise to a 70-month high of 108.2 from 107.8 highlighted a strong start to the year with analyst’s noting that the ESI is pointing towards euro-zone annual growth of 2.5%.

And German bond yields are expected to be capped by the ongoing ECB quantitative easing program. The central bank currently buys EUR80 billion of euro-zone bonds a month in an effort to stoke growth and inflation across the region. The ECB decided at the end of last year to extend this program from its expected end date of March 2017 to the end of the year but at a slightly slower rate of EUR60 billion a month. By the end of 2017, the central bank will have bought in excess of EUR2.2 trillion of debt.

While President Draghi is expected to leave monetary policies unchanged in 2017, he can talk euro-zone bond yields higher by merely mentioning a potential ‘tapering’ of asset purchases in the future. In October 2016, German 10-year bond yields jumped from -0.14% to +0.20% after talk that the ECB was considering cutting back bond purchases. The 10-year yield continued to rise to 0.43% in early December, before dropping back when the ECB said it would extend the quantitative easing program to the end of 2017.

And any talk, or hint of a discussion of a tapering, would give EURUSD a boost in the face of expected higher rates in the US. Any narrowing of the EUR-US yield spread would make the single currency more attractive – or less unattractive - against its US counterpart and soothe tensions between the central bank and its German critics. 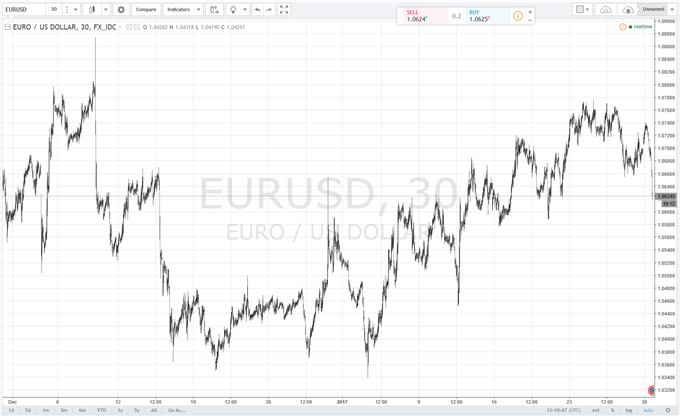