Sterling is Floundering - Time to Buy the FTSE?

A weak British Pound means a strong FTSE 100, right? Well, the FTSE 100 has had an unrewarding few days, failing to break back above 7,200, while the Pound was boosted as investors welcomed some clarity on the Brexit process, and other indexes, notably the Dow and DAX, hit record highs.

But Sterling has since lost some steam, so could the FTSE join the global equity market party? The Pound seemed to be enjoying a rally on the back of the greater clarity on Brexit on Tuesday when the British Supreme Court ruled the government will need approval from Parliament to trigger divorce proceedings from the EU. GBPUSD hit a six-week high yesterday and was touching 1.2700. But it later slipped back and currently trades around 1.25.

There are different explanations for the fall. Yesterday’s UK GDP data came in slightly ahead of expectations, but indicated that it’s the service sector that’s doing most of the heavy lifting. Do investors believe the UK’s economy will at some stage take a hit from Brexit as price pressures intensify? Were traders spooked by the government publishing its Brexit bill, which MPs will debate for five days from Tuesday? The bill is short and sweet as the government promised; just eight lines long and fewer than 140 words, but are investors anticipating further uncertainty over the Brexit process?

Could Sterling’s pause simply be down to Dollar strength? The Greenback is broadly firmer ahead of US GDP and Durable Goods data released later Friday. Sterling sentiment will again be tested by the meeting between British Prime Minister Theresa May and Donald Trump in the US today. If investors take the view that a ‘special relationship’ is flourishing, with May primed to secure a favorable trade deal from the US, then that will likely boost the Pound.

But should the Pound remain under pressure and fall below support levels in the 1.2530 to 1.2420 area, it could return to the 1.2250 area. And this bodes well for the FTSE. It’s currently at 7,157.75, seemingly unable to decide if it’s in bullish or bearish mode. If it does move higher it could look to return to its recent high above 7,300. 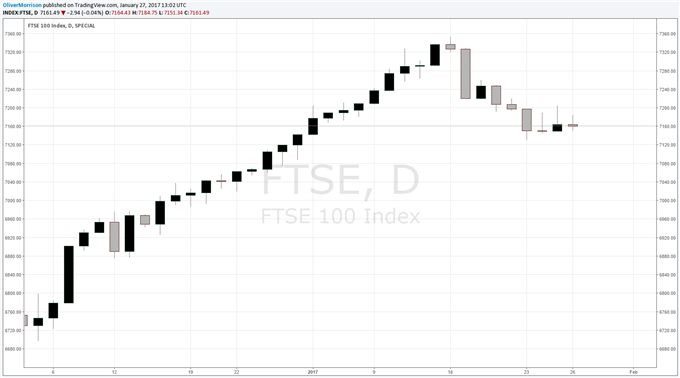 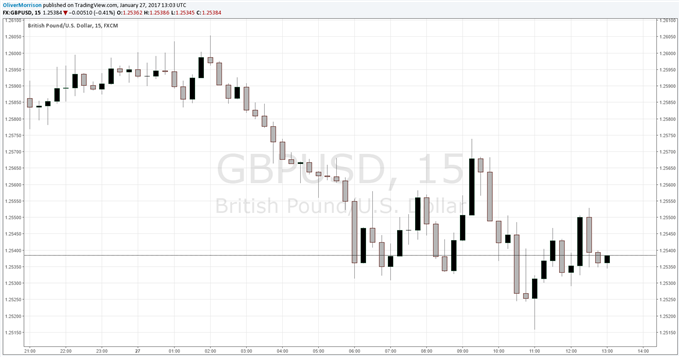