The Japanese Yen barely budged on Friday in the face of local inflation data which was above expectations but still extremely fragile.

The official Consumer Price Index rose 0.3% on the year in December. That was just above the 0.2% gain which the market was looking for, but below November’s 0.5% rise. The “core” measure that strips out volatile fresh food prices fell by 0.2% on-year, when a 0.3% fall has been expected. The “core core” index, which also excludes energy costs, was flat. It had twitched up by 0.1% the previous month.

The more recent January CPI for Tokyo alone rose by 0.1%. It had been flat in December and was expected to be so again.

All up these are a very slightly stronger set of annualized data than the markets had been expecting, but it’s obvious nevertheless that significant pricing power eludes the Japanese economy despite long and strenuous efforts by the authorities to try and stoke it. The national CPI fell by 0.3% on the month in December, for the lowest print since July.

Moreover, this weakness is likely to feed back into wage-settlement bargaining, dampening the wage inflation component further. The Japanese labor market is surprisingly tight, with unemployment just over the 3% level. However, this has not given workers much extra bargaining power. Unions have put members’ job security above strident pay demands in a low-inflation environment. Settlements tend to be predicated on past consumer price developments rather than the central bank’s official 2% annual CPI target, which is obviously very far off.

Indeed, the Bank of Japan’s own assessment is that CPI will only hit 1.5% in the fiscal year which starts in April, and from current levels even that looks optimistic.

Disappointing though these figures will be in Tokyo, the USD/JPY pair barely moved on them, staying around 114.52 after the release. The backdrop which Friday’s Asia/Pacific trade will inherit from the US on Thursday is one of cautious US Dollar strength, albeit in tight ranges against major rivals.

Investors are continuing to weigh new President Donald Trump’s protectionist and isolationist leanings, which by and large they don’t like, against promises of vast fiscal stimulus which they very much do.

Is there anybody out there? USD/JPY after the CPI data 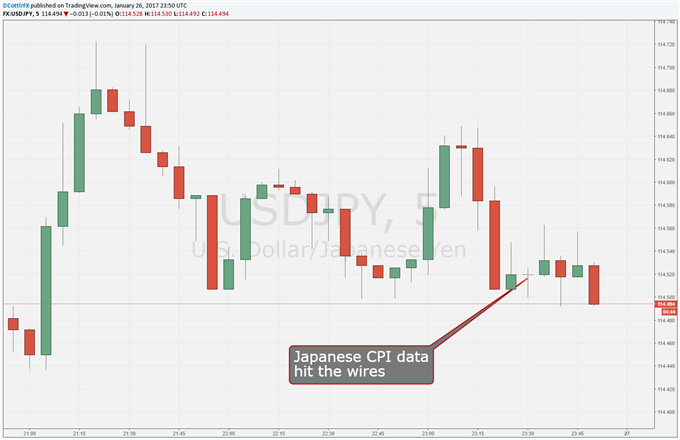 Check out DailyFX analysts’ first-quarter forecasts and see how they’re bearing up with one month gone.