Mexican President Enrique Peña Neito announced on Twitter today, in a follow up to US President Donald Trump, that he would not be going to the United States to discuss bilateral ways to tackle immigration and trade concerns. The cancellation of the meeting on Tuesday will only serve to heighten tensions between the two countries as a NAFTA renegotiation and the border wall construction have gone from idle threats to realistic outcomes.

USD/MXN jumped on the back of the latest news, trading as high as 21.3603 a few moments before this report was published. 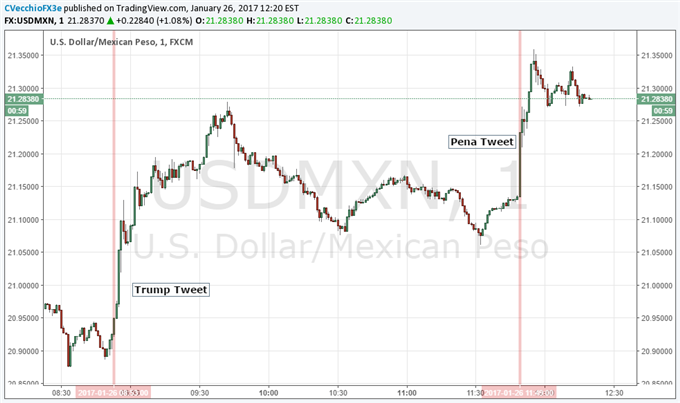 - Trump says that US has a $60 billion trade deficit with Mexico.

A growing row between US President Donald Trump and his Mexican counterpart Enrique Pena Nieto over who will pay for the proposed border wall pushed the Mexican Peso back towards it record lows Thursday. Nieto re-iterated that his country would not pay for the wall between the two countries, provoking a sharp flurry of tweets from President Trump.

“The US has a 60 billion dollar trade deficit with Mexico. It has been a one-sided deal from the beginning of NAFTA with massive numbers of jobs and companies lost.” Trump added: “If Mexico is unwilling to pay for the badly needed wall, then it would be better to cancel the upcoming meeting.”

Nieto is scheduled to meet Trump in Washington on January 31.

Trump has already hammered away at the Mexican currency by stating that he would impose border taxes on goods made in Mexico. Several US auto companies have already started re-thinking their production plans, with Ford cancelling its plans for a multi- billion dollar plant in Mexico while GM is under pressure for importing its Chevy hatchbacks from Mexico to its US dealers.

The Mexican Peso continued to deteriorate after the latest set of tweets from President Trump and USDMXN traded as high as 21.2813 before edging a touch lower. The Mexican Peso traded at just over 22 to the greenback a week ago, a fresh record high. 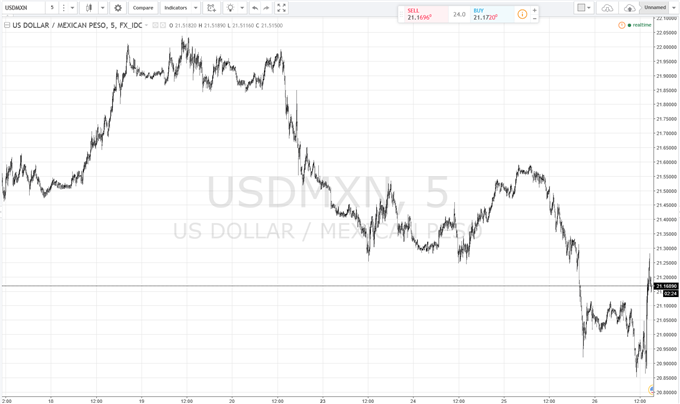