The Australian Dollar slipped a little on Thursday on news that Chinese industrial profits were in worse shape in December than they had been the month before. Its fall was not sustained, however.

Profits rose by 2.3% during the month, compared with December 2015, to CNY844.4 billion. However, that was much below November’s stunning 14.5% rise, which was the second strongest showing for more than two years.

The Aussie Dollar often acts as the foreign exchange market’s favourite liquid China-performance proxy thanks to its home country’s strong raw-material export links with the world’s second-largest economy. It seemed to be doing so once more on Thursday, with AUD/USD slipping to 0.75634 after the data from 0.75847 just before its release, but wouldn’t stay down for long.

At face value, it’s arguable that such a stunning deceleration in profit growth might have called for a steeper AUD/USD fall, but in truth there are one or two possible explanations for why it didn’t.

Firstly, no one was expecting a rerun of November’s bonanza. That month’s numbers were flattered by comparison with a month which was particularly weak the year before. Analysts and forecasters have also queued up to warn that Chinese profits remain heavily reliant on government stimulus, particularly of older, inefficient heavy industry, along with a vast expansion of credit.

Also, industrial profits for 2016 as a whole looked much better. Their 8.5% rise was a strong snap back from the previous year’s 2.3% increase.

Moreover, like most other traded currencies, the Australian Dollar market’s overwhelming focus is on Washington, DC and the latest signs of policy action from new President Donald Trump. The markets have been somewhat schizophrenic about Trump in recent days, sometimes choosing to focus on his “pro-growth” polices, while at others fretting about possible protectionist or isolationist leanings.

AUD/USD had been suffering from a bout of the latter as Asia/Pacific markets opened. The Australian currency is seen as an asset tied closely to global growth prospects, and so tends to slide when those appear to be threatened.

Down and back again: AUD/USD 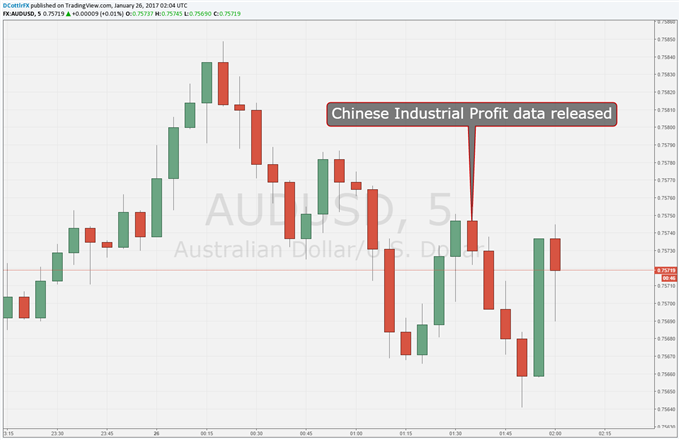 China’s economy grew 6.7% overall in 2016, according to official figures. That was bang in the middle of Beijing’s 6.5%-7% target but still the slowest pace of growth since 1990.

How does your favourite currency look to other traders right now? Take a look at the DailyFX sentiment page to find out.