South Korea’s Won didn’t react much to the news that its home nation’s growth was at its lowest point since the end of 2014 as a gloomy outcome had been pretty much priced in.

Preliminary Gross Domestic Product growth for the final quarter of 2016 came in at 0.4%. This matches the level seen in the second quarter of 2015 but growth hasn’t been lower since the end of 2014.

Annual growth was 2.7%, matching the Bank of Korea’s projection.

Analysts had been expecting a weak outcomeaccording to wire reports however, thanks to feeble consumption and investment levels. Economists had also pointed to uncertainties stemming from an influence-peddling scandal involving President Park Geun-hye as a consumption dampener. Consumer sentiment fell in December to the worst level in more than seven years, a central bank survey showed last month, as confidence faltered in the wake of political scandal.

While the scandal will no doubt blow over in time, the country is sailing into all the additional uncertainties of a new US administration. The Trump White House has already made noises on both trade protectionism and America’s defense burden which will alarm Seoul as a close partner of the US in both fields.

These latest data suggest that the South Korean economy is not sailing into these potential squalls in particularly good shape. However, as we noted earlier, a weak outcome was hardly unexpected. To wit, the Won scarcely moved on the figures. That they came out very early in the Asia/Pacific trading session before markets such as Tokyo and Singapore were up and running probably dampened things as well. USD/KRW remained steady around the 1166.41 level.

The BoK has lowered its 2017 growth call to 2.5% from 2.8%. The good news for Seoul is that with debt-to-GDP at an internationally reasonable 40%, there would appear to be plenty of room for more stimulative fiscal spending. 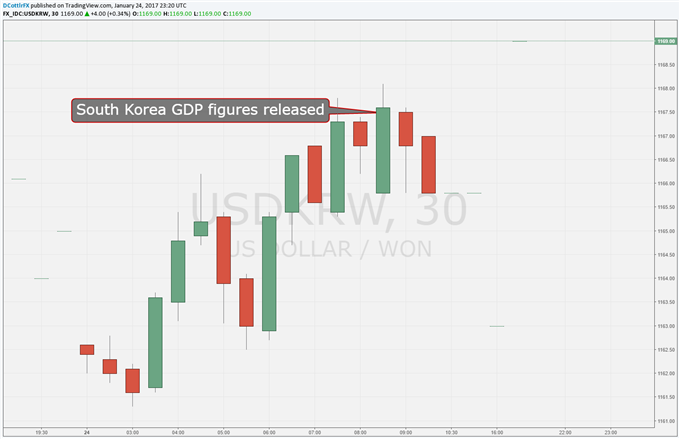 Need a steer on the first quarter of this new year? Take a look at the Daily FX analysts’ forecasts