Yen Ticks Up On Punchy PMI, US Dollar Driving

The Japanese Yen made modest gains against the US Dollar early in Tuesday’s Asian trade after a very sunny report from Japan’s manufacturing sector.

The preliminary Nikkei Purchasing Managers Index came in at 52.8 in January. That’s the highest print for the index since March 2014 and above December’s 52.4 level. Comfortingly for Japan’s makers, new orders were behind much of the overall rise.

For those not initiated in the ways of PMI surveys, they are broadly comparable performance benchmarks despite being compiled by different agencies in different countries. Any reading over 50 signifies expansion in the sector in question. A score under that means contraction.

The Japanese PMI has been rising steadily since the nadir of 47.7 hit in May 2016. January’s figure continues the trend.

Of course, new US President Donald Trump is never far away from any piece of economic data these days and this one is no exception. With all current signs pointing to a more protectionist and isolationist White House, perhaps most notably for Japan in its hostility to the Trans Pacific Partnership trade deal, it’s not hard to imagine the PMI coming under a bit of pressure as 2017 goes on.

The US Dollar sank against most major rivals and especially the Yen on Monday in what looked very like a continuing unwinding of the “Trump trade” which has been in place since the President’s shock November election win. The hope behind this was that the US would pursue expansionary fiscal policy and that the protectionist rhetoric of the campaign trail would be toned down.

So far, policy details have been maddeningly scant and the rhetoric has come at full blast, so the US Dollar has slipped to the benefit of gold, bonds and other perceived haven assets, in which the Yen of course ranks.

That said, Monday’s USD/JPY fall seems to have found a base at 112.52 for the moment and USD/JPY has ticked up since. It slipped after the PMI data, falling from 112.88 to 112.77, but the greenback seems now to be bumping ‘along the bottom’ of its most recent slide.

A fall that has paused for breath? USD/JPY 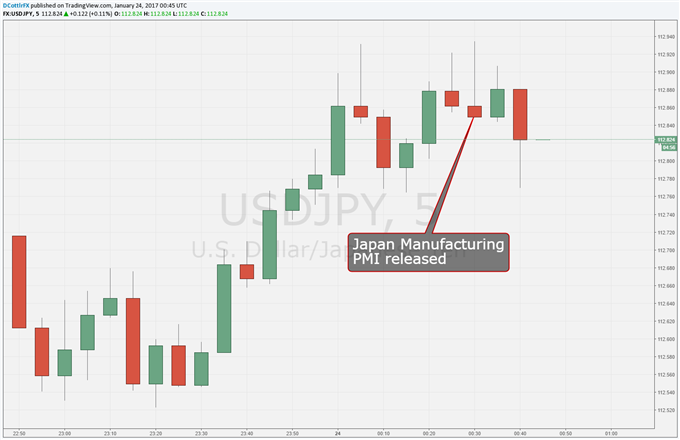 We’ve nowhere to hide. Check out DailyFX analysts’ forecasts for the first quarter and see how they’re holding up.