The Euro dropped slightly versus its major rivals after Euro-Zone PMI data released Tuesday morning showed encouraging growth in the Euro region, but not enough to put the European Central Bank off its plans of sustained policy loosening.

The headline Euro-Zone Composite PMI for January fell slightly from 54.4 in December to 54.3 and was weaker than the 54.6 expected by the market. But, at well above the 50.0 level that indicates flat activity, it still suggests that economic growth continued at a steady pace at the start of 2017.

But, in general, the data bode well for Euro-Zone growth in the near-term. Firms added new jobs at the fastest rate in nine years, while factory growth hit a five-year high.Overall new orders growth in the services and manufacturing sector remains at the equal highest level and backlogs of work rose at a healthy rate. Business expectations for the year ahead were at their highest level for at least four-and-a-half years

Despite these promising numbers, the Euro dropped slightly against the Dollar, Pound and Yen, illustrating the Euro’s two major problems. First, despite the positive data of late, ECB President Mario Draghi remains hell-bent on maintaining his QE-supportive tone. Second, traders are concerned about the longer-term political scene in Europe, with potentially debstabisliing elections in Germany, the Netherlands, France and potentially Italy all looming this year.

EURUSD fell slightly after the PMI release to a session low of 1.07310. EURGBP also dipped, though quickly rose again on the news of the landmark ruling in the UK stating that its parliament must vote on whether the government can start the Brexit process. EURJPY dipped slightly too, and currently trades at121.66. 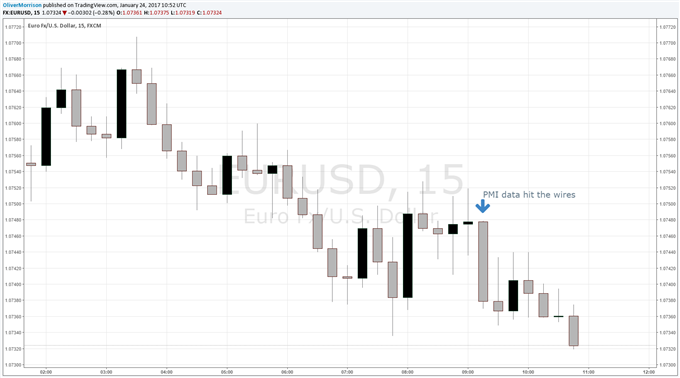