The US Dollar failed to benefit from news that the Markit flash US manufacturing PMI came in above expectations, with new orders expanding at the quickest pace since September 2014. Markit posted a PMI of 55.1 in January, up from 54.3 in December, against market estimates of 54.5, to signal a marked upturn in the health of the sector that was the strongest since March 2015.

The US manufacturing sector’s strong start to the year was largely driven by sharper increases in output and new orders, which rose at the fastest rates in 22 and 28months respectively. US manufacturers raised their purchasing activity at the steepest rate since early 2015 and reported increased production for the eighth month running in January. Furthermore, the rate of expansion picked up to its sharpest since March 2015.

But despite the steepest increase in new orders in 28 months, export orders were stagnant and the rate of job creation, though solid overall, eased slightly from the 18-month high seen in December.

Commenting on the data, Chris Williamson, Chief Business Economist at IHS Markit, said: “US manufacturers are seeing a bumper start to 2017, with production surging higher in January on the back of rising inflows of new orders.

“New work is growing at the fastest rate for over two years, thanks mainly to rising demand from customers in the home market. Export growth remains subdued, stymied by the strong dollar.

He added that the strong growth and increase in price pressures may spur speculation around the next rate hike by the Federal Reserve – which you would expect to boost the Dollar.

But EURUSD spiked in the run up to the data and is now trading sideways around 1.0750. It’s a similar story with GBPUSD, which is hovering around 1.2500, and USDJPY, which is at around 113.30. The US Dollar Index, which measures the value of the Dollar relative to a basket of the top six currencies, is down 0.06% on the day at 100.10.

This may be explained by US existing home sales data, which quickly followed the PMI, and which fell more than expected in December by 2.8% to a seasonally adjusted 5.49 million units from 5.65 million units in the previous month. The consensus forecast was for a 1.1% decrease to 5.52 million units. However, home sales still registered their best year in a decade.

The lack of momentum is most likely down to President Trump’s rhetoric continuing to weigh on the Dollar, and traders will now continue to look to the Trump administration for clues to the potential path of the Greenback in the near to medium term. The Dollar has ceded ground recently amid speculation that the Trump administration will seek to bring it down. Yesterday, the Dollar was hit after US Treasury Secretary nominee Steven Mnuchin said an “excessively strong dollar” could have a negative short-term effect on the economy. 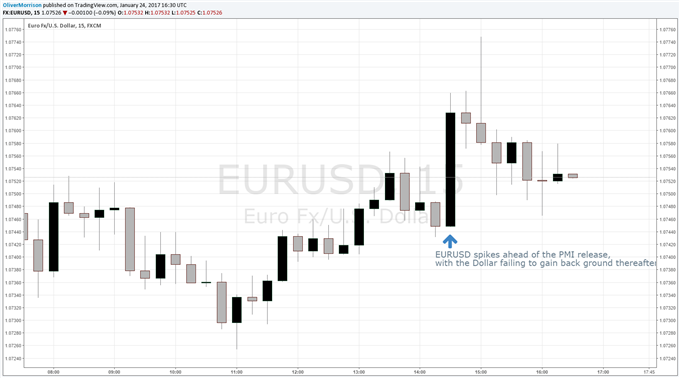