Asian markets have been skittish on Monday following inaugural words from US President Donald Trump Friday which signally failed to address market concerns about his administration’s policy path.

Trump was astonishingly vehement about putting “America first” when he spoke before the Capitol in Washington, DC but scanty on details as to what that might mean. Hiswords did nothing to temper market worries that his policies will lean towards protectionism in economic terms and isolationism in foreign policy.

Asia/Pacific markets duly saw an ongoing unwind of the “Trump trade,” which had lifted both equity markets and the US Dollar in the wake of the maverick property developer’s shock election win in November. So, the greenback wilted, most notably against the Yen but against most other majors as well. USD/JPY got as low as 113.36, having shed more than a whole Yen since Friday.

Limping into a new week: USD/JPY 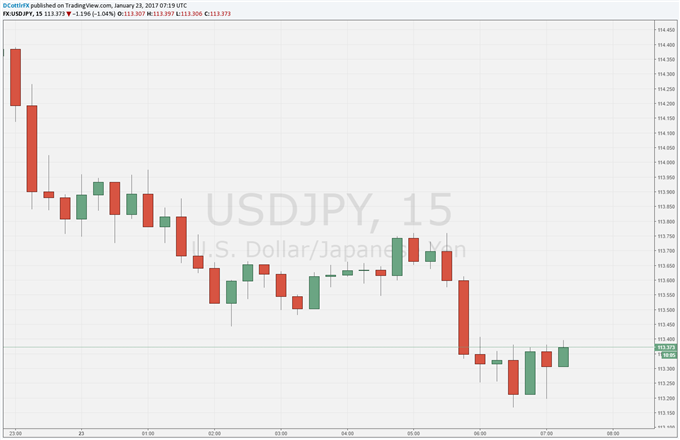 Japanese stock markets liked this not at all, with the Nikkei closing down more than 1.2%. Australian stocks managed initial gains before succumbing to similar malaise for a loss of 0.8% in the ASX. It wasn’t all bad news for stocks, however. Chinese mainland shares managed gains, as did benchmarks in Singapore, South Korea and Hong Kong. There was no obvious one catalyst for these rises however.

China did say it would inject liquidity into its banking system for days around the Lunar New Year holiday period, but has done that fairly regularly at this time of year in the past.

The scheduled economic data calendar was extremely light in the Asian session, as it will be through European and US time on Monday.

Gold was perkier, both thanks to heightened risk aversion and a lower US Dollar. Oil steadied, thanks to apparent investor faith that production cuts from major producers will be made to stick.

Looking ahead we’ll get a look at Eurozone consumer confidence for January and European Central Bank President Mario Draghi will speak in Torino. However, barring significant shock, neither is likely to shift market momentum away from the Trump fretting which has already marked the session.

Want a steer on your favourite currency? Take a look at the DailyFX sentiment page.