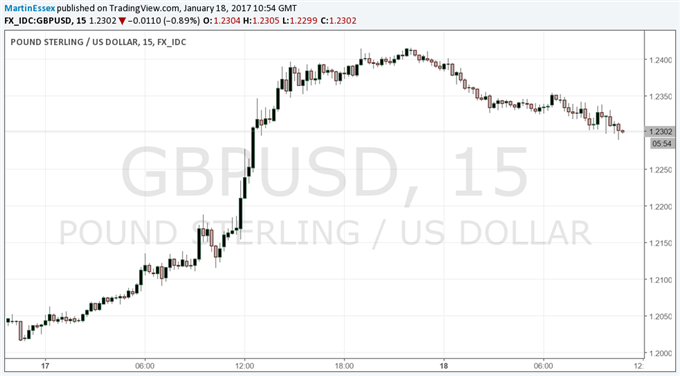 The British Pound weakened modestly Wednesday, giving back some of the large gains recorded Tuesday after UK Prime Minister Theresa May clarified the UK’s position in its Brexit negotiations to leave the European Union. By mid-morning in London it was trading at just over 1.23 after an overnight high of 1.2416. That compares with a low just beneath 1.20 earlier in the week – a level now seen as strong support.

The slippage came despite figures showing that average UK weekly earnings rose by 2.8% year-over-year in the September-November period, up from 2.6% in August-October. That inevitably raised fears of a further rise in inflation after data Tuesday showing that inflation in December hit its highest level since July 2014 at 1.6%; above the expected 1.4%. While no change in UK interest rates is expected near-term, the data make a rate rise, which would be expected to lift the Pound, more likely in future.

The earnings data were offset, though, by figures showing that employment fell by 9,000 in the three months, although the unemployment rate was unchanged at 4.8% and jobless claims actually fell in December by 10,100. The claimant count was stable at 2.3%.

The FTSE 100 index of leading London-listed shares was up 0.1% at 7,228 as the Pound eased back, again showing the inverse correlation between the index and GBPUSD.