Asian markets finished mixed on Tuesday with plenty of caution evident before UK Prime Minister Theresa May’s speech on Brexit plans, billed as her most important yet.

May is expected to fill in some details of her government’s plans for what, precisely, Brexit will look like. The British Pound collapsed sharply to three month lows on Monday as media reports suggested that she will back a hard Brexit. That could mean pulling the UK out of both the European Single Market and the Customs Union should the European Union insist that that is the price to be paid if Britain is to control immigration and strike bilateral trade deals.

Although this prospect has long been numbered among global markets’ most scary prospects, the UK currency managed to hold on to some small gains in Asian time, with GBP/USD getting up as high as 1.2115 and EUR/GBP sliding. The Yen benefitted from what looked like the usual haven demand before a major risk event.

Now we turn to stocks, which lacked the usual Monday steer from Wall Street thanks to the Martin Luther King Day holiday. Japan’s Nikkei shed 1.48% after a volatile session in which finally the pessimists won. Yen strength also kept Japan’s exporters under pressure, as it tends to do. Australia’s ASX 200 closed down 0.9%, with most sectors down by the closing bell in a rather risk averse trading session. Banks remain a particular drag, with all the big four losing ground.

Chinese markets were near flat, with Hong Kong up. Chinese President Xi Jinping will top the bill at the World Economic Forum in Davos later, in his first appearance at the alpine schmooze-fest. Reports suggest he’ll come out with all guns blazing in defense of globalization against what he sees a Western protectionist resurgence.

Aside from the Xi and May show, the day ahead offers plenty of economic data to keep investors pinned to the screens. Heavyweight UK numbers are on offer, on retail sales and inflation, although as May will speak after their release, it might be fruitless to expect any Sterling-market heroics before she does.

Germany’s ZEW sentiment survey will also see daylight, as will the Empire manufacturing snapshot for January out of the US.

Twitching back up: GBP/USD through Asia session 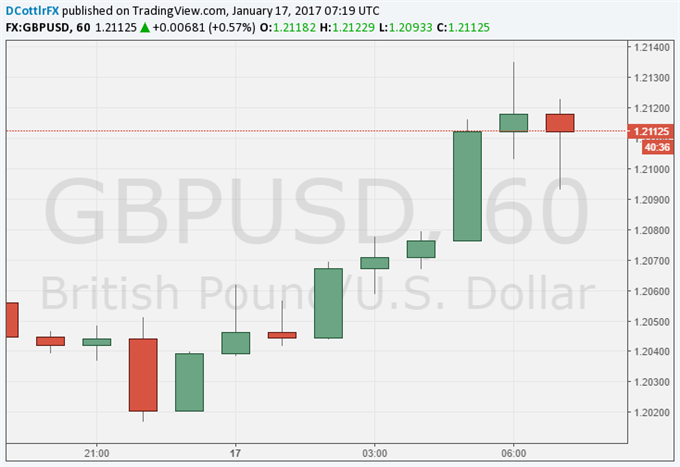