- The single currency holds last week’s gains vs the Dollar; rises against a Brexit-impeded Pound

The Euro-Zone recorded a €25.9 billion surplus in trade in goods with the rest of the world in November 2016, compared with €22.9 billion in the same month of 2015, according to data released Monday by Eurostat, the statistical office of the European Union, beating market consensus of a trade surplus of €24.3 billion. Exports rose 6% to €184.2 billion compared to November 2015, while imports increased by 5% to €158.3 billion.

As improvements in the Euro’s fundamental drivers in the short-term continue to shield the single currency from longer-term political concerns, the trade data are another indicator, after figures last week pointed to a manufacturing sector revival, that Euro-Zone GDP growth improved in the fourth quarter of 2016.EURUSD traded sideways for a second week last week. After trading as low as 1.0540 Wednesday it closed the week higher at 1.0640. In Monday trading the pair remains around the 1.06 level, with the Dollar trading quietly on the Martin Luther King Day US holiday. 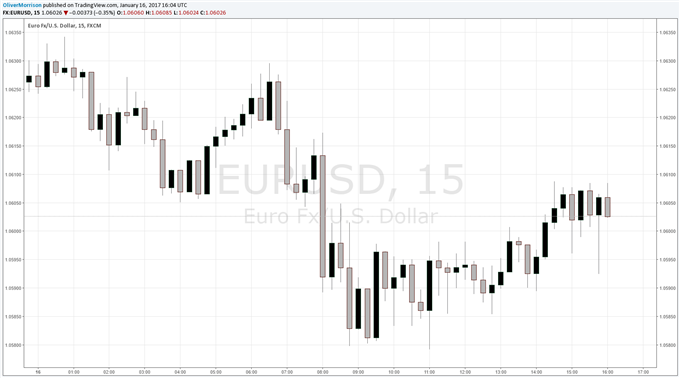 The Euro has risen against the British Pound, but that is likely down to Sterling weakness. The Pound is under pressure ahead of tomorrow’s speech by British Prime Minister Theresa May as markets fear she’ll announce that she’ll opt for a ‘hard Brexit’ and pull the UK out of the single market and customs union. 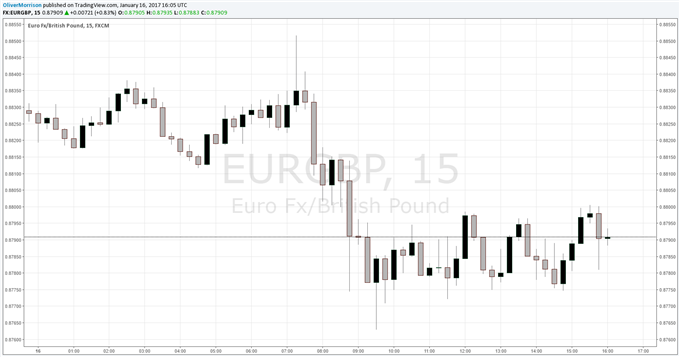 Euro traders’ attention will now turn to the European Central Bank’s rate decision on Thursday. But, despite the positive data of late, ECB President Mario Draghi is expected to maintain his QE-supportive tone. DailyFX senior currency strategist Christopher Vecchio says the scope for the ECB to act at this meeting, one way or the other, seems very limited given the proximity to its policy change in December 2016. There are also new staff economic projections (SEPs) due on Thursday.