Shares in Asia started the new week on a sour note Monday, with a weaker US Dollar biting Japan’s Nikkei especially hard. The British Pound was the session’s major casualty however, clobbered anew by worries that the UK will walk away from the European single market, the hard Brexit that markets have long hoped might be avoided.

Shares in Japan, China, Hong Kong and South Korea were all under the cosh. The latter’s Kospi had the added problem of weakness in Samsung stocks following news that a special prosecutor in Seoul will seek an arrest warrant for group chief Jay Lee on charges in relation to an influence peddling scandal involving President Park Geun-hye. Australia’s ASX was the only index to buck the trend. It continued to climb on the back of ongoing strength in commodity prices and the shares of mining companies.

Stocks in China’s second-largest equity market plunged the hardest for ten months. The tech-heavy Shenzhen Composite Index sank as much as 6.1%, the biggest loss since late February, with 80 stocks falling by their 10% daily limits. The index has looked vulnerable ever since it was opened up to Hong Kong-based buyers last month. The Shanghai Composite Index dropped as much as 2.2 percent in minutes before paring losses.

The session was really all about that British Pound however. It languished at three-month lows after UK Sunday media reports that London is prepared to make a hard exit from the European Union. This would involve losing free access to the European single market and the customs union.

GBP/USD fell as far as 1.1983 in early Asian trade, a depth not plumbed since the so-called flash crash of early October. It has since retraced back above the 1.20 handle but looks far from comfortable there. The markets are now looking ahead with some trepidation to UK Prime Minister Theresa May’s next speech about Brexit, which is scheduled for Tuesday. Billed as her most important commentary yet on the subject, it must put plenty of flesh on the bones of her negotiating position if it’s going to live up to that billing.

The gathering clouds over the Pound distracted investors from a few darker ones over the US Dollar, which had come under some rare pressure in recent sessions as investors wondered what to expect in terms of economic policy from Donald Trump. He becomes President, rather than President-elect, on Friday.

The Euro and the Japanese Yen were the major beneficiaries of these transatlantic doubts, with both moving higher through Monday’s session.

With US markets thinned hugely by the Martin Luther King Jr Day break, European markets may have little to do save kicking over Asia’s themes. Scheduled economic news is thin with the Eurozone’s trade balance and Canada’s new home sales figures coming up. Neither seems likely to be able to override markets’ rather febrile watch for anything Brexit-related. 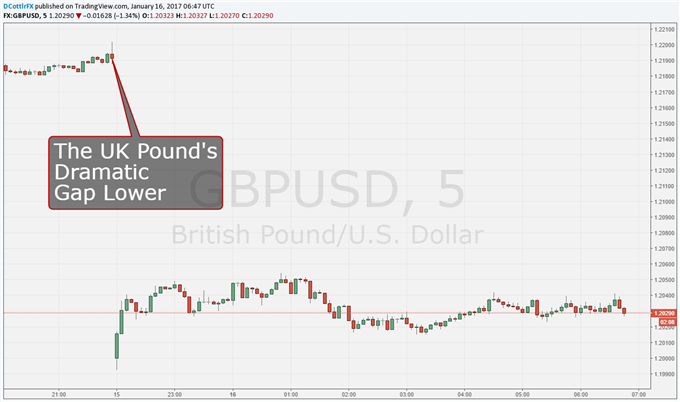 Would you like to know more about financial-market trading? The DailyFX webinars are an excellent starting point.