Would you like to know more about trading currencies or commodities? Check out our DailyFX webinars.

The ICE Dollar Index (DXY) found some support from four Fed presidents speeches Thursday. This recovery on hawkish sentiment follows a notable slide after US President-elect Donald Trump’s press conference which fell short of the fundamental support for growth and monetary policy support he market seemed to have expect. First on the docket was St. Louis Fed President James Bullard, who is also a FOMC voter this year.

Mr. Bullard said that he felt the Fed can afford to be patient on rates as inflation is below their goal and he sees little acceleration. He was cautious and skeptical on what kind of governmental policies may be in store for the future. He went on to point out that there was little movement in Fed rate forecasts. The St. Louis Fed president also notably remarked that the FX market has gotten ahead of itself.

Next on the schedule was Philadelphia Fed President Patrick Harker – who is also a FOMC voter in 2017. Harker struck a more optimistic tone as he reiterated his support for three modest hikes this year (the FOMC’s average forecast at the December meeting). He said that his forecast does not factor in fiscal policy changes as he mentioned that not enough certainty has given him reason to do so. The central banker also stressed that the participation rate is lower than he would like. As for the economy, he thinks that it is displaying considerable strength and that inflation is on track to meet the 2 percent target this year or next.

President of the Atlanta Fed Dennis Lockhart – who is not a FOMC voter this year – is in between Bullard and Harker, forecasting 2 hikes this year. Lockhart also sees a path of gradual rate hikes and that the definition of gradual will depend on the economy.

Chicago Fed President Charles Evans – who is a FOMC voter in 2017 – is in line with the bank’s median 2017 estimate of 3 rate hikes. Evans also expects inflation to head towards the group’s 2 percent goal. He further mentioned that recent data on average hourly earnings was encouraging and that economic fundamentals remain strong. 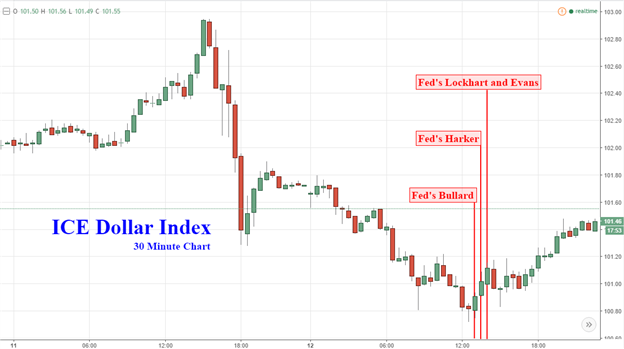