The Australian Dollar continued to gain on Friday despite the release of official Chinese trade figures in which export levels continued to slide.

The country’s overall trade balance for 2016 was a surplus of $40.82 billion, somewhat below the $44.61 billion that the markets were expecting. The meat of the numbers was in the export data, however. They fell 6.1% on the year before, much worse than the 4.1% fall expected. Imports rose 3.1%, beating forecasts by a whisker.

In Yuan terms, the balance was 3.35 trillion Yuan ($490 billion). That was a little less than the 354 billion that markets had projected.

The numbers clearly underline China’s real and potential difficulties in a world in which globalization is under increasing scrutiny. However, Beijing is all-too-well aware of these. The commerce department has said that trade will remain “complicated and “challenging” in 2017. The Customs office reportedly said on Friday that China’s foreign trade situation continues to face difficulties, and that the country will be the “biggest loser” if de-globalization takes hold.

The data also came against a backdrop of rising currency volatility in China, which in turn has meant rising investor worries about capital outflows. The Yuan neared eight-year lows against the US Dollar in the wake of the greenback’s surge after Donald Trump’s November presidential election win.

While no one yet knows whether Trump’s protectionist campaign rhetoric will be matched by policy action once he is in the Oval Office, the signs are not encouraging so far.

The Australian Dollar is often currency investor’s favourite China-proxy bet, but it continued to climb on Friday despite the tepid numbers. Given that much of its pep has seemed to come from China-related hopes, notably for raw material exports, this looks a little hard to square but for the moment the uptrend appears in place. Perhaps investors are holding onto those import numbers. 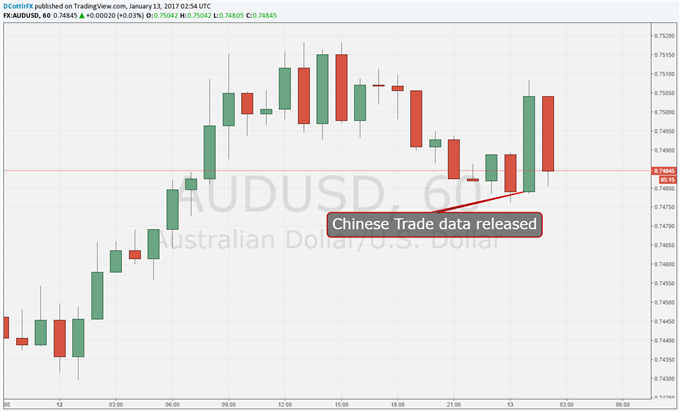 Want to know more about trading but unsure where to start? May we suggest the DailyFX webinars?