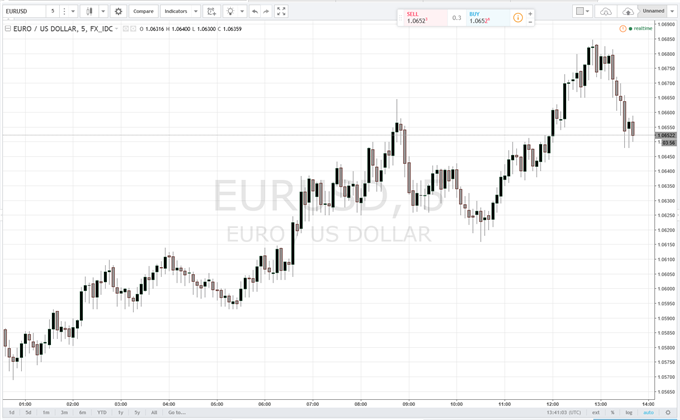 The European single currency broke out of its recent trading range to the upside, supported by the latest batch of strong economic releases. Euro-Zone industrial production rose 1.5% month-on-month, beating expectations of a 0.5% rise, while German GDP year-on-year growth was reported at 1.9%, compared to expectations of 1.8% and a prior reading of 1.7%. Combined, the two releases point to potential Euro-Zone GDP growth of 0.5% quarter-on-quarter in the fourth quarter, against 0.3% growth in Q2 and Q3, as the weak EUR continues to drive the manufacturing sector.

German growth also benefited from the weak single currency, with strong export-driven demand seen from China and other countries within the EU. The latest release prompted the Ifo Institute for Economic Research to re-affirm its 2017 German growth target of 1.5%, although risks remain to the upside.

The minutes of the latest European Central Bank meeting also confirmed that the recovery in the Euro-Zone was continuing at “a moderate but firming pace.” According to the release, the December ECB staff projections - 1.7% in both 2016 and 2017 and 1.6% in both 2018 and 2019 - were broadly in line with the forecasts of other institutions, with a slightly more optimistic view on real GDP growth in 2017.

The recent EURUSD rally, from yesterday’s low of just under 1.0500 to a current 1.0640, began when expectations for more details of President-Elect Donald Trump’s fiscal plans were dashed. Speaking at his first press conference since winning the US Presidency, Trump gave no clues to his tax cuts and spending plans. However, according to recent comments attributed to White House aide Kellyanne Conway, the President-Elect remains committed to cutting taxes across the board and will give more details on his infrastructure plans in his 100-day plan.