A weaker US Dollar and lower stock markets have been Asia’s Thursday response to President-elect Donald Trump’s first substantive press conference since his defeat of Hilary Clinton in November’s race for the White House.

Investors found his tempestuous meeting with US media rather short of the economic-policy details they’ve been praying for ever since then, with nothing revealed about possible infrastructure spending or taxation.

USD/JPY slipped to 114.14 at one point, marking one-month lows and giving the exporter-heavy Nikkei 225 the vapors. It was down 0.9% at the close. Australian stocks fared a little better, ending down about 0.1% although the ASX benchmark had been up about 0.5% at its session high. Aussie pharmaceuticals suffered as had their Wall Street counterparts and for the same reason. Mr. Trump said that the industry was “getting away with murder” in terms of what it charges the US government for certain drugs.

Mainland Chinese stocks ticked lower, with those in Hong Kong also down. Gold rose to seven-week highs, with Trump disappointment also getting the blame for that. It peaked at $1,198.58 in the spot market, its best level since late November.

It’s not a major session for economic numbers in either Europe or the US, which may leave markets there gnawing at the same themes that Asia has been chewing over. We will get a look at Eurozone industrial production and the official account of the last European Central Bank monetary policy conclave.

In the US, continuing unemployment-claim data will see daylight, but the lion’s share of interest may be reserved for Federal Reserve luminaries Dennis Lockhart of Atlanta and Chicago’s Charles Evans who will take part in a panel discussion in Florida.

Asian economic data were also sparse and played second fiddle to the President-elect. Japan’s current account scored a 39th straight month of surpluses. Sticking with Japan, the economy watchers survey was more downbeat in December, but November had been a pretty strong month. 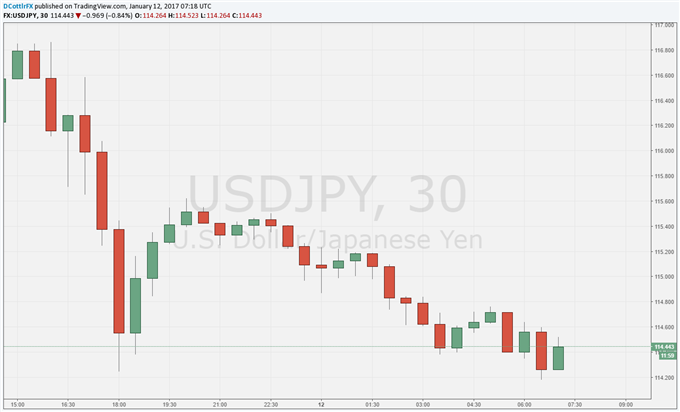 How does the market view your favourite currency? Take a look at the DailyFX sentiment page.

S&P 500 Surges to Start Q4 –Do You Tail or Will it Fail?
Advertisement