- GBP/USD continues to struggle against a strong USD and ongoing Brexit concerns.

The British Pound gained little succor Wednesday, and kept pushing lower, as Brexit concerns weighed on the UK currency. GBP/USD slipped back towards the lows seen back in October 2016 as Bank of England governor Mark Carney answered questions from the UK’s Treasury Select Committee.

GBP was also pressured after a report in The Guardian said that the UK government was likely to lose the landmark legal case on Brexit in the supreme court and have drawn up its least two versions of a bill that could be tabled after the ruling.According to the article, senior government figures market are convinced seven of the 11 judges will uphold the high court’s demand that Theresa May secure the consent of MPs and peers before triggering Article 50.

And in a warning to the EU ahead of the Brexit negotiations, governor Carney said that financial stability risks surrounding Brexit are greater for the Europe than the UK, with the EU banking system more at risk than its UK counterpart. Carney added that a transition deal beyond the two year negotiating period which begins when Article 50 is triggered would be welcomed and advisable and if not the BOE would work to mitigate consequences as much as possible.

Earlier in the day, official UK data painted a mixed picture with manufacturing and industrial output data surprising to the upside while the UK trade deficit widened to GBP4.2 billion in November from GBP1.5 billion in October. Later in the day NIESR, the UK’s longest established independent research institute,

estimated the UK economy grew by 0.5% in the fourth quarter, matching analysts’ expectations.

GBP/USD may continue to weaken further in the short-term as the market deals for President-elect Donald Trump’s first press conference after winning the race for the White House, especially if more details on the incoming President’s USD1 trillion infrastructure spending spree are revealed. At the time this report was written, the press conference was not yet under way. 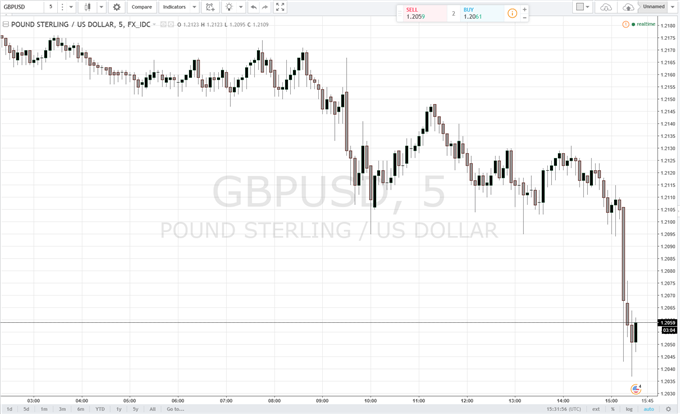