Wall Street’s Friday pep saw off the Monday blues for Asian bourses although North Korea managed to take some of the shine off, as it so often can.

The Dow Jones Industrial Average came within a whisker of the 20,000 mark on Friday in the aftermath of official labor data out of the US, and that was the backdrop against which Asia started a new week.

Australia’s ASX benchmark rose nearly 1% in the Sydney afternoon session, with gains across the board except for raw materials. The still-live prospect of higher US interest rates has taken some of the sheen off gold. When interest rates and bond yields rise the clear disadvantage to holding gold, that it yields nothing, is thrown into starker relief. Sure enough, ASX gold stocks faltered again.

Onward and upward: the ASX enjoys a punchy session 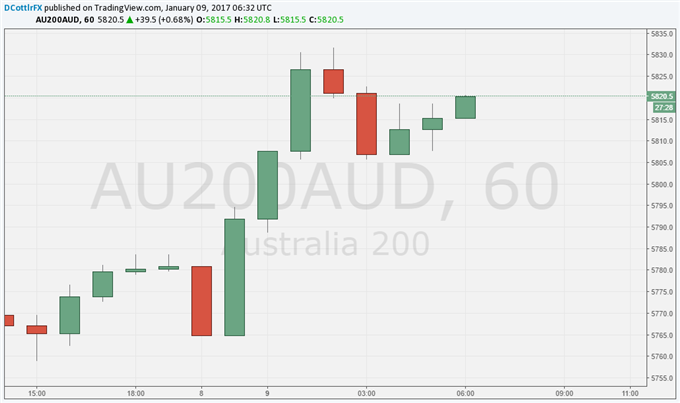 Japanese markets were out of the game for a holiday on Monday, leaving South Korea’s Kospi index to whipsaw. Electronics titan Samsung was still making progress after Friday’s announcement that profits likely surged in 2016’s final three months. However, on Sunday North Korea said that it could test a missile with intercontinental range at any time, according to Reuters. This kept Seoul from fully participating in regional gains.

In the currency markets, the US Dollar inched ahead thanks to what markets see as the continuing prospect of a series of interest-rate increases from the Federal Reserve this year. However, with Tokyo out, trading will have been much thinner than usual.

The USD index crept higher but was last up about 0.1% at 102.30. Meanwhile Yuan strength continues to reverse. The People’s Bank of China “guided” the USD/CNY midpoint to 6.9262, a sharp drop for its currency compared with Friday’s 6.8668 fix. China’s central bank doesn’t let the currency move more than 2% from its daily fix in onshore trade.

Last Saturday China released currency reserve information for December. Its gargantuan reserve fell by $41 billion to £3.01 trillion. This was a sixth consecutive monthly decline, reflective of the PBOC’s unceasing efforts to prop the Yuan up and head off capital flight.

How are traders positioned in your favorite, or most-hated, currency? Check out the DailyFX sentiment indexes.

S&P 500 Surges to Start Q4 –Do You Tail or Will it Fail?
Advertisement