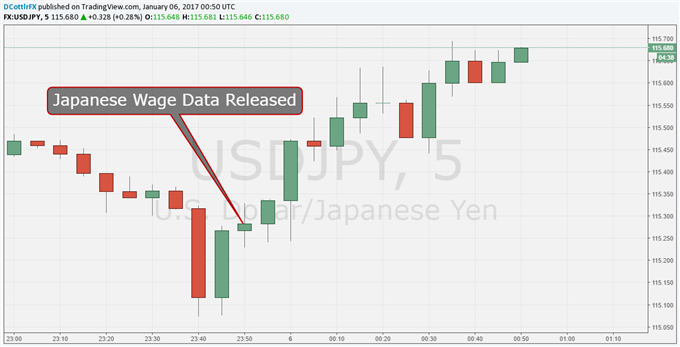 Yen Slips as Bonuses Gnaw at Real Wages in Japan

The Japanese Yen slipped a little against the US Dollar following news of a fall in real Japanese pay levels.

Wages fell in November for the first time in nearly a year, according to official data released on Friday. The fall is likely to be a check on the private consumption which Tokyo would so desperately like to see, and was partly due to a slide in bonus payments.

Labor Ministry numbers showed inflation-adjusted real wages falling 0.2% on-year in November, after a flat print in October. Nominal wages rose by 0.2%, however, following a 0.1% rise in October. “Special payments” include winter bonuses. They fell by 3.4%. Regular pay rose for a fifth consecutive month but overtime pay was down 1.3%.

The numbers suggest that faster wage growth looks likely to be a tall order for corporate Japan, despite a tight job market and high profits. With inflation weakening, pay talks are likely to mean moderate wage rises perhaps at best, according to economists. The data came just a day after Prime Minister Shinzo Abe urged bosses to play their part in supporting economic recovery by raising pay levels in the new year.

There is of course much focus on the “USD” side of any currency pair in Friday’s session as markets await what is arguably the most important single data release of the month. That will be the official roundup of US labor statistics which will be released after many Asian markets close.

We have nowhere to hide. Check out DailyFX analysts’ first-quarter forecasts and see how they’re bearing up.