- Job growth came in just below expectations (in line with ADP), still strong enough to not disrupt the overarching trend.

Jobs growth in the United States slowed to +156K in December, slightly below expectations of +175K, as the economy showed further signs of modest improvement. The November reading was revised higher to +204K from +178K; overall, leaving the two-month net revision was +19K after a small revision lower to Octonber.

Today’s reading of +156K is as middle of the road as they come. It’s important to keep in mind that, while markets psychologically hold +200K as the threshold, Fed officials like Janet Yellen and John Williams have spoken out saying +100K is enough to sustain the current unemployment rate.

Other parts of the report painted a mixed picture of labor force strength. The labor force participation rate remains a disappointment, holding at 62.7%, which helped keep the unemployment and underemployment rates in their general downtrends. The unemployment rate eased a touch to 4.7% from 4.6%, the lowest rate to end a year since 2006.

While most of the signs pointed to another ‘Goldilocks’ report, there was one major silverlining: wage growth. Annual wage growth came in at +2.9%, the fastest rate since June 2009. While the first few days of this year have proved anything but strong for the US Dollar, signs that wage pressures are building are likely to help reinvigorate inflation expectations. Higher inflation expectations necessitate higher US yields, which could help underpin the greenback.

As far as rate hikes are concerned, this report is a mixed bag, although it will probably put the brakes on the USD profit taking in the near-term. Strong economic data combined with the expectations for highly accommodative and expansionary fiscal policy can lead the Fed to raise rates sooner and faster to head off expected inflation. Fed funds futures continued to price in rate hikes in June 2017 and November 2017 after today’s data, just as they did pre-release (although the expectations curve has steepened slightly). 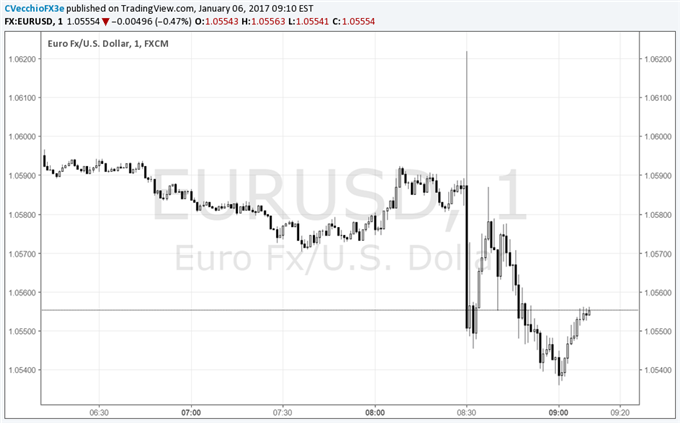 Immediately following the data, the US Dollar traded higher against most major currencies after the wage data was digested. EUR/USD traded in a choppy 85-pip range, settling at 1.0554 at the time this report was written.

Read more: Preview for NFPs as US Dollar Loses Traction