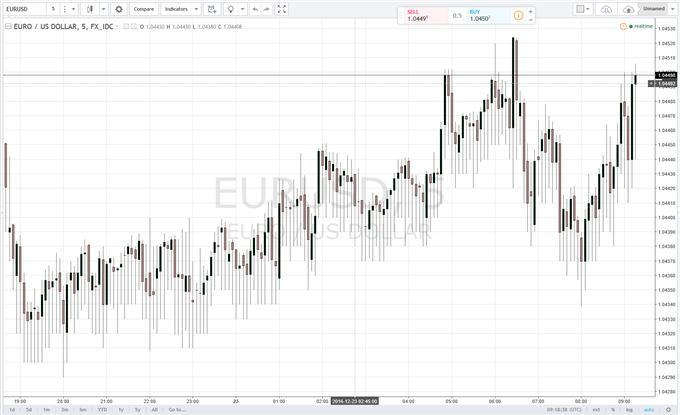 German consumer confidence ended the year on the up, with the December GfK index edging higher to 9.9, beating expectations, and a prior month’s reading, of 9.8. A further positive saw the economic expectations index move higher for the third month in a row to 16.4 from November’s reading of 15.3.

A strong German labor market backdrop and persistently low interest rates have combined to keep Europe’s growth engine ticking over, bolstering confidence for the year ahead, despite an array of roadblocks on the horizon. According to the market research company, consumers seem to be immune to a series of risk factors. These include the outcome of the U.S. elections, Brexit, the failed referendum in Italy and subsequent resignation of Prime Minister Renzi and “the persistently high terror threat.”

In other economic news, the third and final reading of French GDP confirmed third-quarter growth of +0.2%, reversing the -0.1% seen in the second-quarter. According to detailed figures from Insee, the National Institute of Statistics and Economic Studies, household gross disposable income accelerated by +0.7% in Q3, compared to +0.3% in the prior quarter. Wages earned wages by households also increased in Q3 by +0.6% compared to 0.4% in Q2.

The Euro bid firmed a touch after the German release, but little is expected to happen as markets close down for the Christmas vacation. EURUSD edged a touch higher to 1.04480, aided in part by the news that late Thursday the Italian parliament agreed a state-led rescue of Banca Monte dei Paschi di Siena. The long-troubled Italian bank recently failed to raise new investor funds and admitted that it only had four months of liquidity left.