What does that mean? Well, put simply while the currencies of major raw material producers like Australia and Canada can have close, obvious links to their top-rated commodity export (like crude oil or iron ore), sometimes other local or domestic factors can take a turn in the driving seat.

That certainly seems to be the case now for the Canadian Dollar. It usually exhibits a strong correlation with crude oil prices. That shouldn’t be a surprise. It’s the world’s seventh-biggest oil producer, and the primary-energy sector plays what by developed-market standards is an unusually large role in its overall performance.

However, despite oil-price rises following the production cut agreed this month by both the Organization of Petroleum Exporting Countries and major producers outside the cartel, the so-called Loonie looks to have been following not the black stuff but the “Trump trade.”

That’s the trend toward a globally stronger US Dollar in the wake of Donald Trump’s election to the US Presidency back in November. The background to this trade is the expectation that President Trump will unleash vast fiscal stimulus, which will drive up US inflation and bond yields, and the hope that he won’t be as protectionist as he often sounded on the campaign trail. Cue a more attractive greenback.

Sure enough, USD/CAD is tracking the implied path of US interest rates higher rather than the price of a barrel of crude. Can this last, or will the Canadian Dollar eventually recouple with Canada’s major commodity export? After all, history suggests that that is a likely play.

But past oil production cuts have often proved notoriously hard to police. If this one proves similarly tough, oil-price rises may be smaller than the market expects. And, while hugely symbolic, the agreed reductions of just under two million barrels per day are not vast compared to the 100 million or so size of a well-supplied global market.

Sure, oil price forecasts have been revised higher in many cases, but not hugely. JP Morgan reportedly put its forecast for Brent up this week, to $58.25/barrel for 2017, with its US-crude call now $56.25. Both represent increases of about $5 apiece. That’s hardly seismic, and the bank has also reportedly worried that “cheating” on production quotas will probably undermine prices towards the end of the new year.

At the moment, it doesn’t look as though oil prices will rise sharply enough to force currency traders’ attentions back on them, and away from Trump trading. At least not soon. The market will probably wait at least long enough to see exactly what President Trump wants to do in office, with USD/CAD’s link to US rate futures waiting along with it.

Watch out however. Bloomberg reported that the most traded oil option in Tuesday’s international benchmark Brent crude market was the $100 December 2018 call option. That offers the right to buy oil at that price at that time. This news doesn’t mean that many people think oil will reach that lofty level by then, but it does indicate perhaps that some traders are confident that production cuts will stick.

More stories of this kind might put CAD focus back on oil, but the sort of price gains now forecast for crude are more likely to keep it in “Trump watching” mode as 2017 gets under way. 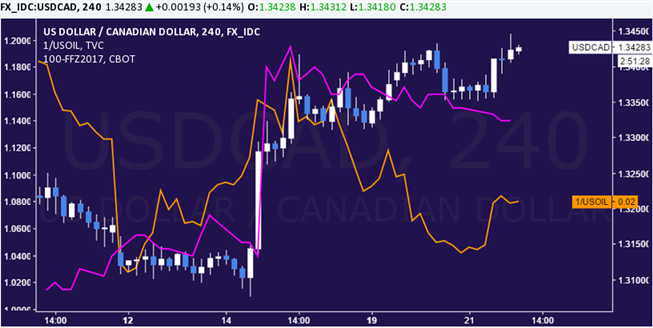 Find out what DailyFX analysts are focused on right now by checking out our webinars.