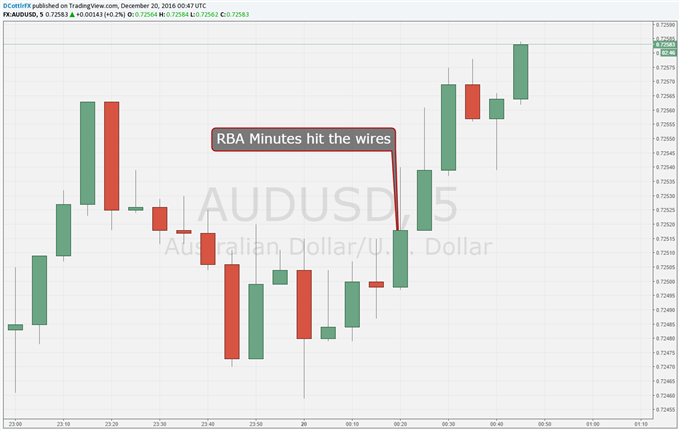 The Australian Dollar rose on Tuesday following the release of the Reserve Bank of Australia’s latest set of policy-meeting minutes which suggested that the US Federal Reserve may have done some of its work for it.

The minutes covered December's RBA conclave at which the key cash rate was left unchanged at the 1.50% record low. That’s been in place since August. The RBA felt that inflation was expected to stay low for some time, and that third quarter growth would be weaker than expected. So it proved.

However, the central bank also said that it had to balance the benefits of low rates with the risks to household debt from any further monetary easing.

Crucially, it also noted that a rising Australian Dollar could complicate the economy’s transition away from the reliance on raw-material exports which have been such a prop to Australian growth. On that score, at least, the Fed has ridden to the rescue. The generally strong US Dollar seen after last week’s interest rate hike and hawkish rhetoric has seen AUD/USD slide to six-month lows.

The RBA said that there remains some slack in the Australian labor markets, and that the strength of employment-growth momentum remains uncertain. The international economic backdrop looked modestly more positive to the RBA’s rate setters, who also called the world inflation backdrop more balanced than it had been for some time.

All up these minutes don’t seem to suggest that the still-lower Australian rates are imminent and the market seems to have reacted accordingly, with modest Aussie Dollar buys but no strong kickback against the stronger-US Dollar trend.

For the moment it looks as though the RBA will content itself with worrying in public about a strong Aussie Dollar rather than taking action to try and procure it.