- German business optimism rises in December to its highest level since February 2014.

- German economy is making ‘a strong finish to the year,’ says IFO.

The Euro remains under the cosh versus the Dollar despite German business optimism rising in December to its highest level since February 2014, according to a survey published Monday.

Munich-based economic institute IFO said its business climate index, based on a monthly survey of around 7,000 companies, rose to 111.0 from 110.4 in November. That was better than the consensus forecast of an increase to 110.7, and supports expectations that Europe's largest economy will rebound in the fourth quarter.

"The German economy is making a strong finish to the year," Ifo chief Clemens Fuest said in a statement. He added that both the manufacturing and wholesaling indices rose and manufacturers were planning to increase production in the months ahead. The survey ties with an upbeat surveys last week from IHS Markit and the Centre for European Economic Research (ZEW) which showed increasing output from Germany’s manufacturing sector helping the Euro-zone economy as a whole to end the year on a strong note.

Despite the good news from the Euro-Zone’s largest economy, the Euro is expected to remain weak next year as it faces a minefield of political risks, starting with the election in the Netherlands in March, which threaten the single currency’s very existence.

EURUSDhas slumped to around 1.04 and is looking increasingly likely to hit parity in the first half of next year. Despite its general bearish downtrend, there are breakout opportunities in the pair that traders could attempt to capitise on, says Forex Trading Instructor Walker England. 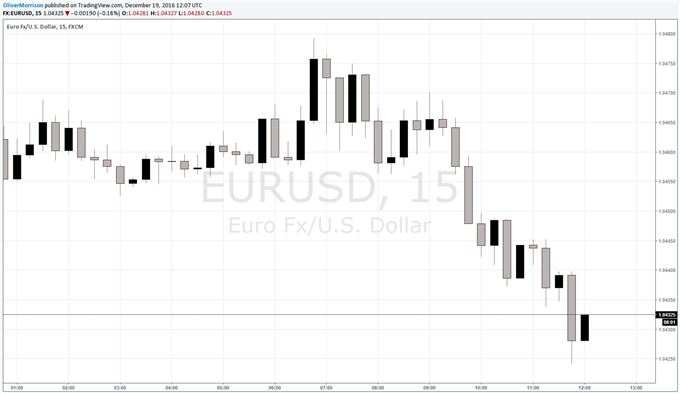 The Euro is however, making small gains on the British Pound, which was stung by fresh Brexit jitters earlier today. EURGBP has reached a high of 0.84100 so far in Monday trading. The Dax 30, meanwhile, is little changed after the IFO data, holding its December uptrend at 11400.