- Growth continues across the Euro-Zone, inflation picks up.

The Euro-Zone economy maintained a robust pace of expansion at the end of 2016, according to the latest PMI survey data, rounding off the best quarter this year. The Composite index remained unchanged at 53.9 as Manufacturing picked up to 54.9 from 53.7 while Services slipped to 53.1 from 53.8.

According to survey provider Markit, the headline manufacturing PMI rose to its highest since April 2011, reflecting the largest monthly increase in output since April 2014, “buoyed by increased competitiveness resulting from the depreciation of the Euro.” The survey also highlighted the growing price pressures in the area, driven by a combination of the Euro’s depreciation and rising global commodity prices. Average input prices rose at the fastest rate in five-and-a-half years.

Commenting on the data, Chris Williamson, Chief Business Economist at IHS Markit said: “The Euro-Zone economy is ending 2016 on a strong note. The PMI indicates that business activity has risen at the fastest rate so far this year in the fourth quarter, signalling GDP growth of 0.4%.” He added that Germany is leading the upturn, where the PMI is indicating a solid 0.5% expansion in Q4 while France is also picking up steam with its PMI indicative of 0.3% growth.

This end of year fillip did little to help the single currency which traded either side of the 1.05 handle against the US Dollar, after Fed Chair Janet Yellen hiked rates by 0.25% and indicated another three rate hikes in 2017, one more than previously expected.

See the DailyFX Webinar Calendar for a schedule of live data coverage due over the coming days. 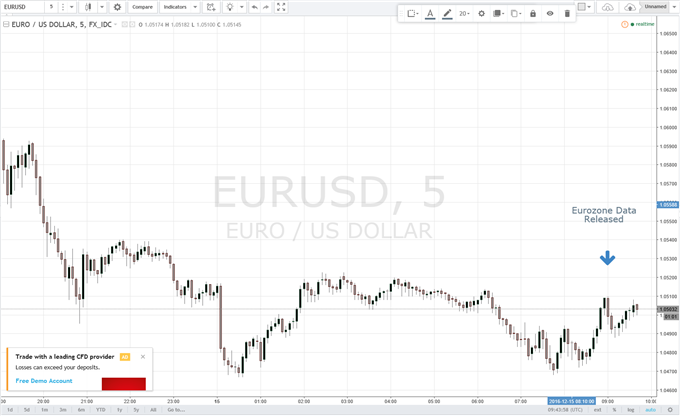 Meanwhile, Greek debt relief problems have resurfaced after Europe’s stability fund, the ESM, froze short-term payments to the Hellenic Republic. The stability fund reacted after Greek Prime Minister Alexis Tsipras said that he would spend any budget surplus on pensions for the most needy and would scrap a sales tax on the East Aegean islands affected by the migrant crisis. Cutting pensions is one of the demands being made by Greece’s creditors.