- As was widely expected, the Bank of England has kept UK interest rates and all other aspects of monetary policy unchanged.

- But it warned of a lower path for inflation and economic risks due to the Brexit vote – which is potentially Pound-negative.

The British Pound has slipped slightly as markets digest the Bank of England’s December Monetary Policy Committee meeting. As was widely expected, the Bank kept interest rates and all other aspects of monetary policy unchanged, an indication that it will most likely sit tight on rates next year.

The MPC agreed unanimously to hold the main Bank Rate at 0.25%, and maintained government bond purchases at £435 billion and corporate bond purchases at £10 billion. But the minutes highlighted a slightly lower path for inflation than previously envisaged, due to the Pound’s recent rebound after its post-Brexit-vote slump. This could lessen the chances of future rate hikes.

The MPC said: “Since the Committee’s previous meeting, sterling’s trade-weighted exchange rate has appreciated by over 6%, while dollar oil prices have risen by 14%. All else equal, this would result in a slightly lower path for inflation than envisaged in the November Inflation Report, though it is still likely to overshoot the target later in 2017 and through 2018.”

It also warned that slower wage growth risks squeezing household budgets and spending next year as Brexit gets under way and develops. Any signs of a dip in economic growth will put pressure on the Bank not to raise interest rates, which would be negative for the Pound.

But the Bank reiterated its previous stance that is was ready to make monetary policy tighter or looser depending on how the economy evolves as the Brexit process gets under way. It said: “Monetary policy could respond, in either direction, to changes to the economic outlook as they unfolded to ensure a sustainable return of inflation to the 2% target.” 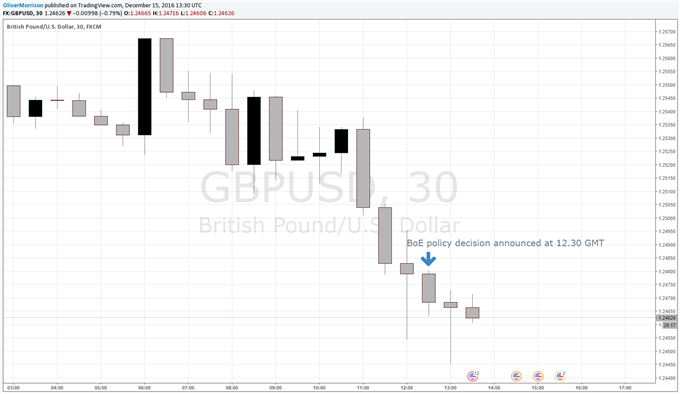 GBPUSD dropped to a low of 1.2444 in the aftermath of the decision, though much of that may be down to the Greenback’s strength. The Fed’s rate hikes, which boosted the Dollar yesterday and today, will continue to put downward pressure on Sterling against the Dollar.