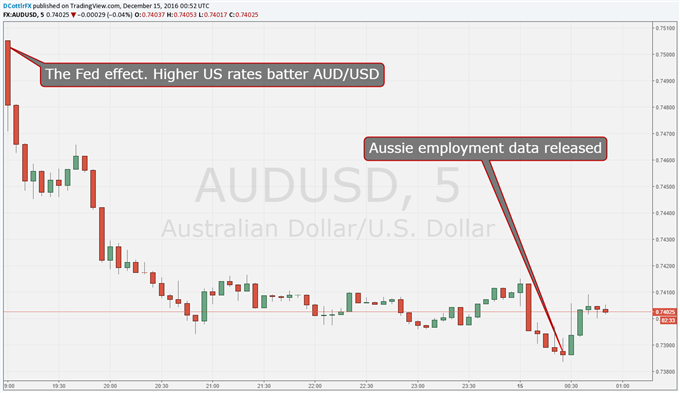 The Australian Dollar was whacked by its US cousin following the US Federal Reserve’s decision to raise interest rates, but some upbeat local employment numbers saw it take back a little ground on Thursday.

The report showed the economy added a net 39.1k jobs in November, easily topping expectations calling for a 17.5k increase. That is the best performance in 13 months. What’s more, October’s reading was revised up to 15.2k gain versus the 9.8k previously reported.

The unemployment rate ticked up to 5.7%, a tick above both market expectations and the previous month’s reading. This is not necessarily bad news however: the participation rate unexpectedly rose to 64.6% from 64.4% previously, so the rise in the jobless rate may reflect an influx of sidelined workers back into the labor force rather than layoffs.

With that said, the Australian economy put in a surprisingly weak third-quarter growth showing. Today’s figures are probably not enough to fuel lasting optimism about a much hoped-for year-end bounce-back by themselves.

AUD/USD had already retreated sharply after the Fed raised interest rates and forecast three more hikes to come in 2017. It abandoned the 0.75 handle which had been in play all week for the 0.73s. After the labor data it edged up past 0.74 again.

The Reserve Bank of Australia may decide that the US central bank has done some of its stimulative job for it. It has often bemoaned the effects of unwarranted currency strength and a weaker Aussie Dollar in the wake of the Fed’s decision will render Australian exports more tempting.

As such the jury is out on whether Australian interest rates have further to fall; these latest employment figures will probably keep it out a little longer.

How are DailyFX forecasts bearing up in the fourth quarter? Take a look here!