- GBPUSD is rallying after its falls over the past week.

- UK trade data for October came in much better than many analysts were expecting.

- However, political rather than economic factors continue to dominate trading.

GBPUSD is firmer Friday, recouping some of its losses over the past week, after news of a smaller than expected UK trade deficit. However, the optimism was tempered by news of big upward revisions to previous months following an error by the Office for National Statistics in how trade in gold was recorded.

The figures showed the trade deficit in October narrowing to £1.971 billion from £5.812 billion in September – an upward revision from the previously announced £5.2 billion.The deficit in goods alone narrowed to £9.711 billion in October from September’s upwardly revised £13.832 billion – a much bigger improvement than the £11.8 billion deficit economists had forecast.

By contrast, construction output fell slightly on the month and in the three months to October continued its downward trend. Output in the sector dropped by 0.6% in October compared with growth of 0.9% in September and economists’ forecasts of a modest 0.2% rise.

Meanwhile, the Bank of England/TNS Quarterly Survey showed a jump in the public’s near-term inflation expectations but the Bank’s rate-setting Monetary Policy Committee is likely to be please by news of only a limited rise in long-term expectations and by a forecast that inflation is actually expected to be lower in two years, at 2.5%, than in a year, at 2.8%.

Taken together, the numbers helped extend an earlier rally in GBPUSD. 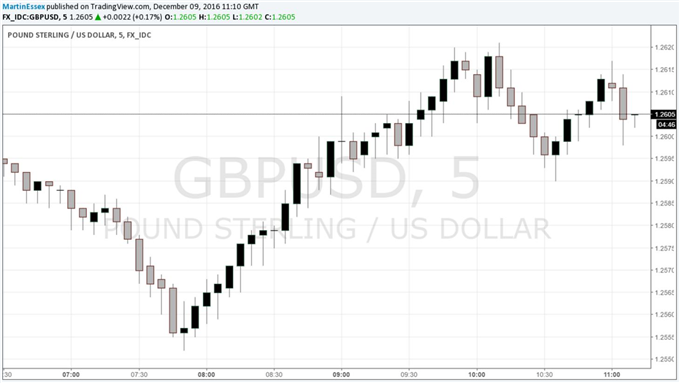 The improvement in the UK trade data likely reflect the weakness of the British Pound in the aftermath of the Brexit decision to leave the European Union. However, there’s little doubt that the main drivers of the currency at present are the tortuous negotiations to bring the Brexit referendum result into practice.

Also, for now at least, the main driver of GBPUSD will be the US side of the equation, with the Federal Open Market Committee expected to raise US interest rates next week and perhaps drop some hints about further increases in the New Year. While higher US rates remain in prospect, the market’s bias to buy the Dollar looks set to remain intact.