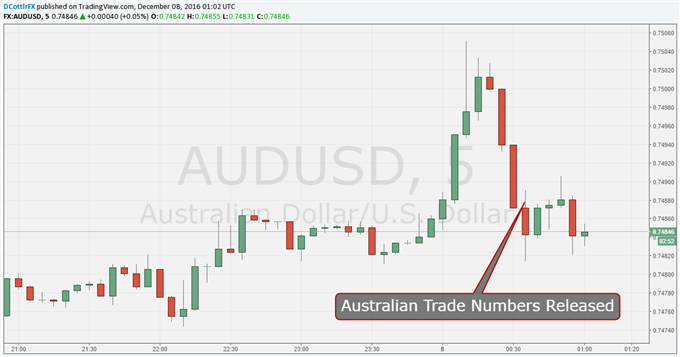 The Australian Dollar was steady on Thursday despite yet another piece of local economic data which managed to underwhelm.

After a woeful growth print on Wednesday, this time it was trade’s turn. The trade deficit for October came in at A$1541 million (US$1.15 billion), hugely wider than the A$610 million gap markets had been looking for. The deficit had been expected to narrow very sharply thanks to surging commodity prices.

As it turned out the value of exports rose by 1%, while imports jumped by 2%. The data will be a worry for those who were expecting a growth fightback in the final quarter of 2016, fueled by export strength.

The Australian Dollar wasn’t hit by the data, although AUD/USD spiked upward just before it. AUD/USD was at 0.7484 after the release, from 0.7487 just before. The Australian stock market also managed to shrug off the numbers in a generally perky Asian session for stocks.

Investors reportedly remain hopeful that increased commodity demand from China will mean that current Australian data weakness won’t prove lasting. There is also some debate as to whether weaker numbers will translate into lower interest rates from the Reserve Bank of Australia. The Cash Rate is already at a record low of 1.5% and, faced with a regionally frothy housing market, the RBA may want to see fiscal policy doing some of the stimulus heavy lifting.

That said it has recently flagged Aussie dollar strength as a possible headwind, and lower rates should weaken it, so more data-watching will be the order of the day for the Aussie.

Want to know what DailyFX analysts are thinking right now? Here are our webinars.